The Book of Dhaka: A City in Short Fiction 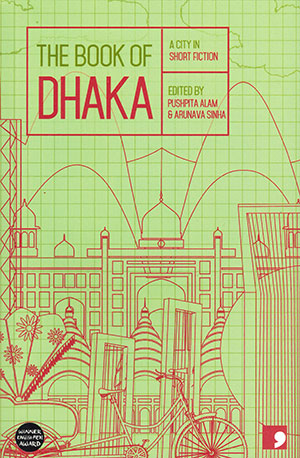 To call The Book of Dhaka overdue is an understatement, given the dearth of translations of contemporary writers working in the Bangla language, which has nearly four hundred million speakers in Bangladesh and northeastern India. Edited by Pushpita Alam and Arunava Sinha, the book accomplishes just what it sets out to do, depicting what introduction-writer   K. Anis Ahmed describes as “one of the most colourful and chaotically jolly cities” in all its colors and chaos.

The diversity of the stories’ socioeconomic settings reflects the city’s, and the interactions between Dhaka residents from differing social classes make for particularly entertaining stories. This is on display in Shaheen Akhtar’s “Home,” translated by Arifa Ghani Rahman, in which protagonist Bindubula is beckoned by demanding wealthy clients to provide her services as a traditional masseuse. She traverses Dhaka by three-wheeled van and rickshaw, rubbing mashed lentils and other traditional beauty cocktails into backs and necks to make a meager living. The story ends with a revelation steeped in twentieth-century Bangladeshi history, which permeates many of the ten stories in the book.

Wasi Ahmed’s “The Widening Gyre,” translated by Ahmed Ahsanuzzaman, depicts the city’s politically charged atmosphere, as three men march through the streets with a banner held high and very little fanfare, demanding justice for a murdered friend. With little popular support, their planned rally ends poorly, to say the least.

Many of The Book of Dhaka’s stories contain references to traditional Bangladeshi customs, from the food described in several stories to the songs excerpted in Bipradash Barua’s “The Princess and the Father,” translated by poet Mohammad Shafiqul Islam. Rather than attempt to translate the untranslatable, the editors chose to present endnotes after each story, which offer both cultural and historical explanations when needed.

The quality of the translations and their editing is a testament to the quality of output from the workshops held at the Dhaka Translation Center, which noted Bangladeshi poet Kaiser Haq describes in the foreword: these stories are as alive as the city they celebrate and describe. The Book of Dhaka is an exciting omen for the future of Bangla-language literature translated into English.