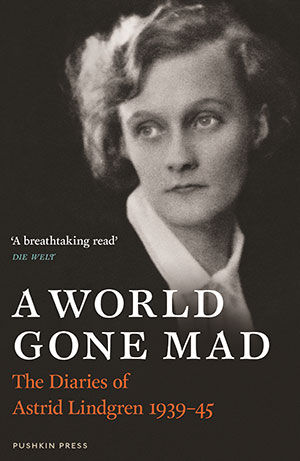 “A terrible despondency weighs on everything and everyone. The radio churns out news reports all day long. . . . God help our poor planet in the grip of this madness!” Substitute “radio” for “Internet” and this could be from many a contemporary diary. It is, however, taken from the first entry in Astrid Lindgren’s “war diaries,” written between 1939 and 1945, before and during her rise to popularity as creator of the Pippi Longstocking series, among many others.

From day one of the war, Lindgren followed the newspapers and radio closely, meticulously summarizing what she read and heard. She tracks the rising tide of fascism in Germany and Italy, the ebb and flow of their allies, and the fall of their enemies. While Lindgren was staunchly antifascist, through her words we see Sweden’s uncomfortable relationship with Hitler’s Germany and her people’s desire to assist their neighbors in Finland and Norway.

Lindgren blends the everyday with the extraordinary, interweaving her darkest thoughts and deepest fears. Entries drift seamlessly from the occupation of Poland to what her family ate for dinner. Juxtaposition of the Holocaust with four types of herring may seem distasteful but emphasizes that, for most, daily life continued despite death and destruction abroad. Sweden as a nation suffered very little, but Lindgren’s writings demonstrate the individual suffering arising from feeling powerless and privileged—feelings no doubt currently experienced by many.

Sarah Death’s translation perfectly captures the 1940s, placing us in the appropriate time period rather than updating Lindgren’s language for modern audiences. Oddly for such an intimate text, her translator’s note focuses on facts concerning the diaries rather than her experience translating them. Additionally, it’s disappointing that Lindgren’s collection of newspaper cuttings are not replicated in this edition, substituted for brief captions, which do not deliver the same effect.

Lindgren’s depiction of the war is valuable in its uniqueness—Pearl Harbor, for example, is barely mentioned, while we learn a huge amount about the Nordic experience. Recalling Sweden’s infamously “neutral” stance during World War II, the diaries illuminate the relatively unseen struggle of many Swedes facing their nation’s refusal to react. That they capture the uncertainty and resilience permeating our popular consciousness is simultaneously unsettling and comforting. As we move into a grim-looking future, it is imperative to remember both how much we have survived and how much things can change overnight.