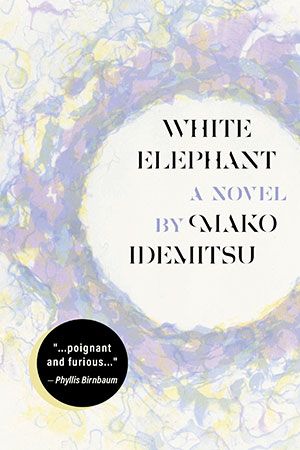 Set in the 1960s, White Elephant follows the lives of sisters Hiroko and Sakiko, two of the four daughters of Japanese business magnate Morimasa Morimoto and his distant, unhappy wife, Sadako. From an early age, the sisters are taught that their duty in life is to “devote themselves to [their father] however they could, each in her own way.”

The two middle sisters, Eiko and Fusako, marry men of their father’s choosing. However, both firstborn Hiroko and Sakiko, the youngest, leave postwar Japan to live in the United States. Hiroko goes to New York, where she is expected to achieve success as an artist, with her father’s blessing and financial support. Sakiko, who wants to be free of her conservative family, convinces her father that she wants to see the country that is home to the banks backing his business. Once in San Francisco, however, she begins hanging out with a group of artists. She winds up pregnant and reluctantly marries Paul, the baby’s father. Because she’s afraid to approach her imposing father directly, she asks a female Japanese friend to tell him of her marriage to a white artist. The friend must first make an appointment to convey the news. Later, she receives a letter from Fusako telling her that she has disgraced the family and driven their mother to drink. Fusako writes, “My own personal feeling is that you should apologize by taking your life.”

Meanwhile, in America, Sakiko confronts racism, sexism, and her own ambivalence regarding motherhood, while the lonely but haughty Hiroko falls into inappropriate relationships with white American men and struggles as an artist. Unable to fulfill her father’s ambitions for her, she sees herself as a white elephant: “something burdensome, a costly encumbrance.”

The novel has virtually no plot, and the point of view changes frequently. Occasionally, the otherwise straightforward narrative becomes overly self-conscious, as in flashbacks relating memories of conversations overheard from within the womb. Overall, however, the collage-effect results in a refreshingly frank portrait of these materially privileged Japanese women. Although the lives of the fictional sisters seem, at times, unbearably bleak, it’s consoling to know that the real-life Mako Idemitsu, daughter of Japanese petroleum executive Sazo Idemitsu, went on to become a successful author and video artist.