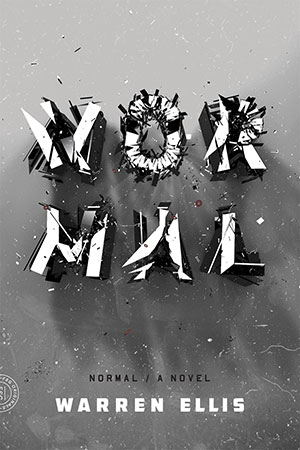 We need a new word to describe a book like Normal. “Novel” doesn’t quite cut it, because as a novel (or any of its length-centric denominations), Normal doesn’t work. Which sells the work as a whole short, because it works spectacularly well as a collection of ideas.

A common thread throughout Warren Ellis’s work is a kind of schizophrenic unity, in that the voices vary in theme but never tone. All his books consist of the author talking to himself. When you have a mind as bendy and twisty and fascinating as the mind we find here, that makes for great reading. But it doesn’t make for a particularly good “novel.”

Normal takes place in a mental institution for futurists who have an acute case of “abyss gaze,” that is, they’ve seen the future, and its darkness has rendered them spiritually dead. We have a protagonist in the form of “Adam Dearden,” who has developed drone technology and seen his inventions grow beyond him to a point that he is existentially drained and on the verge of suicide. This person feels very “Ellis.” We meet several inmates of the asylum, who all feel very “Ellis” to varying degrees, the same as the characters in Crooked Little Vein and Gun Machine felt “Ellis.”

The novel drops off at the climax and picks back up a week later. We skip all that stuff and Ellis fills us in, hastily, pedal all the way to the floor. At times the similes become hilarious; I lost count of the times things or people were described as “like something” or “like someone.” This lack of focus on the specific both propels the reader forward, forcing us to read on faith and intuition, and belies a true feeling of impatience on the part of the author. As Ellis himself states, “It had, he admitted to himself, often been an entertaining experience, but now his tanks were empty and he needed either fuel or airplane mode.”

All of which is to say that I’m happy to have a book like this exist, and I will happily read the next thing Ellis shoots down the pipeline. He’s been on this wavelength since Transmetropolitan, and I wouldn’t want him any other way. It’s a strange paradox, really, that the elements which make this book a fascinating patchwork of ideas and monologues fundamentally break the fourth wall necessary to construct the stale glue supposedly necessary to make up what we call a “novel.” This book doesn’t work, and I love it for that.