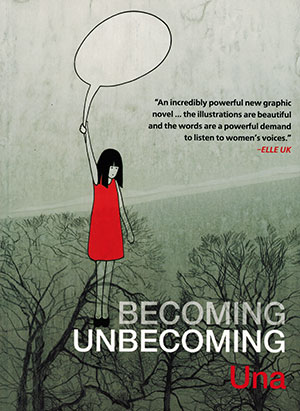 In an era when grabbing a woman against her will is still not universally condemned, Una’s book is clearly necessary. This is not to say that necessity makes for truly great art, or whether that is even the point, but this harrowing tale in the guise of a graphic memoir is certainly effective.

From 1975 to 1980, in the north of England, Peter Sutcliffe, the so-called Yorkshire Ripper, attempted to kill twenty women and succeeded in killing thirteen. It is against this backdrop that Una’s work unfolds, yet the eponymous character is not a victim of the Ripper but is, rather, an ordinary young girl who is victimized by men from the age of ten. In this context, the Ripper’s sensational crime is seen as less of an aberration than we might expect, though it is writ larger. In fact, the everyday crimes of men against girls and women appear to be legion.

In stark and simple language that echoes her drawing style, Una relates the tale of an older man, Damian: “First he got my trust. Then he got me alone.” Una doesn’t have to be graphic in her descriptions—the reference to the trousers around Damian’s ankles is enough—and much of the horror comes from the urgency of her need for secrecy. As a result of this early abuse, Una’s ability to play by the rules falters. “The rule was that girls were supposed to keep boys under control. I didn’t seem to be able to do this.” The sexual double standard is alive and well to this day, and Una does an admirable job of explaining and decrying it.

Men’s exploitation of women is nothing new, and Una’s cry is heartfelt and often remarkable in its description and documentation. It is both heartbreaking and therapeutic to trace the trajectory of her life from being molested to being slut-shamed to finally finding her balance and insight. And the artwork, from two-dimensional cartoons to artful sketches based on Artemesia Gentileschi’s Judith Slaying Holofernes, is idiosyncratic and engaging. Especially moving are her portraits imagining the future lives of the Ripper’s victims had they lived.

There is, though, a slightly distracting yet emphatic element in the inclusion of abuse statistics and the suggestions of how to combat the problem. In a way, this is two books: one the tale of Una and a memorial to those thirteen women who were killed by the Yorkshire Ripper and the other a didactic warning. Yet Becoming Unbecoming is a profound plea to what is still a mostly patriarchal society that can tend to minimize threats to women. It is heartbreaking that this plea is still needed.