The Ornatrix by Kate Howard 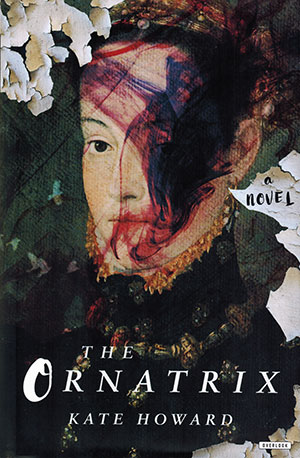 Despite being ever-evolving, the culture of beauty is one that looks similar across the ages. The details change from century to century, yet throughout time women have plucked, painted, and preened themselves to reach an ever-shifting idea of physical perfection. In so doing women have also engaged in highly risky behavior that leaves their bodies and faces permanently damaged, feeding a cycle of abuse in the name of pleasing the gaze of others. This juxtaposition of ugly consequences in the hunt for beauty has long been a dark mark on cultures, a largely open secret that women have sought to overcome or ignore for generations. In her debut historical novel set in Italy, author Kate Howard explores the dangerous business of beauty and the consequences of women pitting themselves against one another to achieve a romanticized ideal image.

Flavia is the daughter of a dyer, living in rural isolation with her family and chafing against the restrictions such a life has put on her. Born with a disfiguring scar on her cheek in the shape of a bird, Flavia’s mother keeps her hidden away, and the young woman is certain she will never enjoy a normal life. This rage manifests on her sister’s wedding day, when Flavia uses deeply shaded dye to paint her birthmark onto every piece of cloth her sister owns—including her wedding dress. In response, her family sends her to live in a convent, a punishment that Flavia resents but which offers her a window to the outside world.

While there she meets Ghostanza, the widow of a wealthy patriarch from a nearby city and a woman known for her beauty. Ghostanza quickly takes Flavia under her wing, calling her an ornatrix, or an assistant who helps women apply their makeup. Ghostanza’s process is complex but rests on a foundation of Venetian cerussa, a white face paint that poisons the skin. In her new role as right-hand woman to Ghostanza, Flavia begins venturing into the city to replenish her jars of makeup and soon becomes interested in using the stuff herself. To do so, and to break free of the constraints her family has put her under, Flavia hatches a plan that makes her a threat to Ghostanza and thrusts her into the high-stakes world of aristocratic beauty, where Flavia’s steady and skilled hands make her a pawn in the games of those trying to outwit each other while altering their faces.

The dangers posed by centuries-old makeup and beauty practices are well documented and known—from the damage caused by applying poisonous pastes to the skin to long-lasting threats like the loss of teeth. Howard brings those threats to life in a way that history books often struggle to do, making clear the cost women were willing to pay to make themselves stark white and carefully painted. There is a desperation to her female characters—and a willing ignorance in the men—that feeds tension throughout the story, creating a sense of building danger and consequence that chases Flavia from the very early pages of the book.

Where the book shines, however, is in its subtle examination of the way women compete with one another. Flavia, Ghostanza, and the other women engaged in the high art of beauty see each other as rivals or necessary tools to be used in their own search for flawless makeup. The effect is chilling, like snakes crawling over each other trying to escape a pit. That only two of the men in the novel—one of them a dealer in makeup and the other a doctor—are aware of the lengths to which women go to make themselves appear as they do adds a layer of inanity that verges on tragic. Destruction of the self and others all to catch the eye of those who barely seem to register the effort—that is what Howard captures subtly and powerfully.