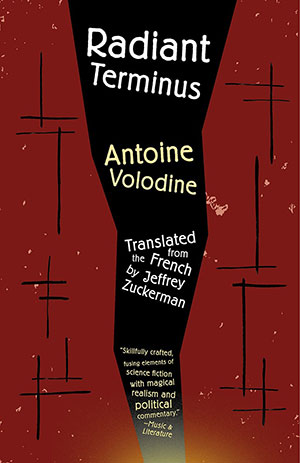 Life or death? Dream or reality? Antoine Volodine destroys these binaries with the force of a nuclear meltdown, much like those that (in the novel) caused the downfall of the Second Soviet Union and the near-obliteration of mammalian life on Earth.

In this latest from the self-styled writer of “post-exotic” works, the remnants of humanity move across a wrecked yet lush landscape, seeking shelter and rest—a terminus, ultimately, where ceaseless, pointless wandering is no longer necessary. Several characters wind up at a small commune called “Radiant Terminus” run by Solovyei, whose name conjures up a villain of traditional East Slavic oral epic poems. Volodine’s Solovyei, though, creates and declaims his own epic narrative prose poems that tell of his malicious capacity to bring people back—but only partly—from the dead.

Radiant Terminus is at once a paean to the unquenchable human spirit and a horrific nightmare about a degrading and depressing immortality. At times, Solovyei partially “resurrects” people in order to entertain himself or take care of the basic maintenance work around the commune.

And then there are people like the Gramma Udgul (and Solovyei himself?), whose exposure to high levels of radiation following a chain of nuclear disasters has made her seemingly immortal (basically, she ages at an incredibly slow rate). This old but spry woman who has thrived on bombardments of nuclear particles presides over the reactor core of Radiant Terminus like a high priestess at a sacred temple. She talks to the core almost prayerfully and then oversees the sacrificial offerings brought to (and thrown into) it by the commune residents: computers, corpses, telephones, refrigerators.

Solovyei’s malevolence and continuous psychological violations ultimately convince some of the residents (including his own daughters) to try and overthrow him, a task that seems laughably absurd given that he is at once a human and a crow and the void in which his undead wander. And yet they give it a try.

As in much of his other work, Volodine here explores the literary potentials of the Bardo Thödol from the Tibetan Book of the Dead (in which the dead move toward enlightenment or rebirth over seven weeks and forty-nine days). Radiant Terminus continuously destabilizes the sense of an end point; indeed, the title suggests a terminal that emits radiation (e.g., energy unleashed by nuclear reaction)—thus an end point that is always in flux. By the end of the book, you’ll feel like you’ve wandered across the bewildering landscape of Volodine’s own mind, and you’ll wonder if he had as much fun with you as Solovyei did with his creations.