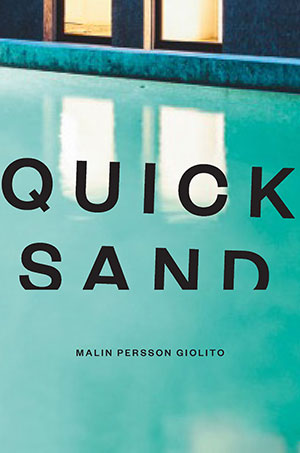 Truth be told, Malin Persson Giolito’s fourth novel, Quicksand, is an indictment of the zeitgeist.

Victor Hugo called quicksand “a pit of mire in a cavern of night” in Les Misérables. Appearing safe, a bog pulls you down—deeper if you struggle, as the protagonist does figuratively in this English-language debut. A Swedish author based in Belgium, Persson Giolito puts a teenage girl on trial for involvement in a mass shooting at a Stockholm prep school. The Swedish Crime Writers’ Academy named Quicksand 2016 Best Crime Novel of the Year.

Maria (“Maja”) Norberg gets the whole volume as a forum, but her flippant first-person voice prevents it from becoming a tearjerker. She paints a sweltering global landscape with prophetic condemnation.

Quicksand opens in a classroom with six people: five shot, one not—Maja Norberg. Shot are the teacher and four students: Maja’s boyfriend (Sebastian, son of Sweden’s richest man), Maja’s best friend (Amanda), Samir (in a special program in international economics and social sciences), and a trade-school pupil from Uganda.

Quicksand is a whydunit, not a whodunit. What exactly did Maja do—or not do? Seeking that answer, Persson Giolito employs the young woman in broader queries. What is “truth”? Or “justice”? How unequal can a society become while remaining stable? Let’s examine prejudice, refugees, deportation, class, immigrants, the American Dream, economics, parenting, race, and human news value. The author scrutinizes gender issues—the liability of being a smart girl and the Bechdel Test of a movie’s sexism.

Maja’s lawyer debates the semantic criminality of teenagers expressing themselves “carelessly, but inappropriately” à la psychologist B. F. Skinner’s book Verbal Behavior: “What is said by a sentence is something more than what the words in it mean.” Maja notes a “fresh new wrinkle in the Narrative.” The references range from David Bowie to the Bible.

Quicksand corresponds to Les Misérables. As Jean Valjean literally carried Marius above his head through the Paris sewer quicksand, Maja Norberg metaphorically carries Sebastian until his weight pushes her down—leaving us with Inspector Javert’s quandary of “the human heart inadmissible” as evidence.

Quicksand will pull you in, to wonder at the end if it’s over.