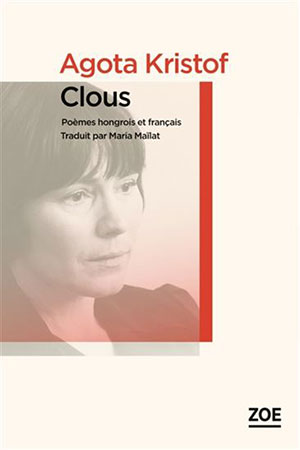 Western Europe is usually credited with inventing expressionism and surrealism at the end of the nineteenth century, but both artistic movements may well be natural ways of being, seeing, and thinking the world that the citizens of “the other Europe” never lost. Hungarian writer Agota Kristof’s poems remind us of this just as much as the 2016 Neustadt Prize laureate, Croatian writer Dubravka Ugrešić. Kristof’s poems also remind us of another dimension forgotten by our hyperurbanized world, as they express nostalgia for a simple, bucolic lifestyle reminiscent of Haim Nahman Bialik’s paeans to the homestead.

Born in 1935, Kristof was ten when the Soviets occupied Hungary. She married her history teacher at eighteen, and she was twenty-one when they fled Hungary with their four-month-old daughter. At twenty-five she was the single mother of three, supporting her family by working in a watch factory in Bern, Switzerland, where she died in 2011. She wrote her drama and prose works in French but penned most of her poems in Hungarian, reconstituting them from memory (the original youthful versions were left behind in 1956).

Kristof became famous in 1987 following the publication of her first novel, The Notebook, which was translated in thirty-three languages. She received numerous European literary prizes. Her poems are translated here for the first time. Toward the end of her life, Kristof entrusted the manuscript to Maria Mailat, whose French translation is extraordinarily sensitive, faithful, and fluid. We cannot fail to notice in these poems the quintessential nucleus of Kristof’s prose and dramatic works as well as the inspirational power of the mother tongue.

The poems of Agota Kristof embody spatial and corporeal freedom, like Chagall in words. The characters who inhabit them float through life in a world whose every element and dimension are linked. A dreamlike invitation to a voyage, the poems release body and soul into a state of fatelessness where characters separated by fate and death find each other over and over again. This fluid scenery contrasts with the disconnectedness and minimalism of imagery in a fashion reminiscent of Soviet writer Leonid Dobychin. For both writers, cryptic shortcuts cover holographic stories whose untold amplitude is as important as the words in print.

This deconstruction of reality is staged in multiple counterpoints and role reversals: children not yet born cry and suffer while the dead continue to feel, love, see, and move around; mountains get personified while dead bodies grow trees and new life; wind, water, air have feelings and perform purposeful actions. These strategies blur the boundaries between life and death, city and countryside, earth and atmosphere, exile and homeland, presence and absence; yet the residual contrapuntal structure allows the poet to create countless variations and vignettes.