Iraq + 100: Stories from a Century after the Invasion 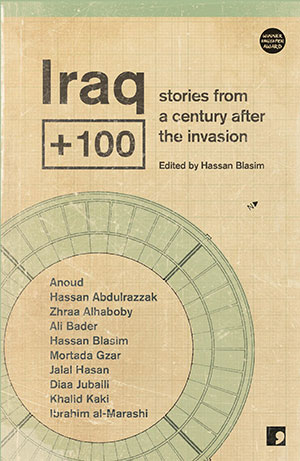 Iraq + 100 envisions the political and psychological consequences of the occupation a century into Iraq’s future. Written by authors of diverse ages and backgrounds, the speculative stories share themes of technological progress, religious intolerance, and the power of rhetoric to conceal and warp painful truths. In Jonathon Wright’s clear-eyed translation of “The Gardens of Babylon,” by Hassan Blasim, the thoughtful narrator’s bleak insights reverberate in our present crises: “Violence is the most brutal sculptor mankind has ever produced. A barbaric sculptor: no one wants to learn lessons from the works he has carved.”

The most intellectually successful stories in the collection are those that revel in technological promise. Some of that technology, like passports embedded in fingertips in Ibrahim al-Marashi’s “Na-jufa,” eagerly locates Iraq on the frontier of global progress. “Kuszib,” by Hassan Abdulrazzak, imagines a use for robotic puppies to swallow bombs, a note of levity in an otherwise dire vision of Earth under alien dictatorship, where human flesh is a delicacy. Many of the political changes forecast are caused by our looming environmental emergencies as well as the devastating impact of the occupation. In Anoud’s “Kahramana,” the Islamic State of Wadi Hashish has filled the power vacuum. Anoud’s keen characterization exposes the hypocrisy of religious zealotry by casting the state’s leader, Mullah Hashish, as a homosexual who vilifies homosexuality.

The writers balance dark humor and despair with a frail thread of hope for the future of Iraq. Stories like “Kahramana” call for compassion, while “The Corporal,” by Ali Bader, depicts an Iraq in which compassion is commonplace. Translator Elisabeth Jaquette skillfully maintains the sensual imagery of Bader’s imagined city: “Kut, like a pair of soft, parted lips, her golden day waking with the light. Her river recumbent, reclining. It looked like heaven, her lights not veiled by dust, her bold breasts like a deluge of moons.” This is the paradise that Iraqi characters in each of the stories yearn to reach—an Iraq unburdened of war and thirst, a place of rest and beauty.

Editor Hassan Blasim is right to present these stories as an enthusiastic response to the hunger for speculative fiction. The writers featured in this collection promise to define Iraq’s present through daring, lucid visions of its future.