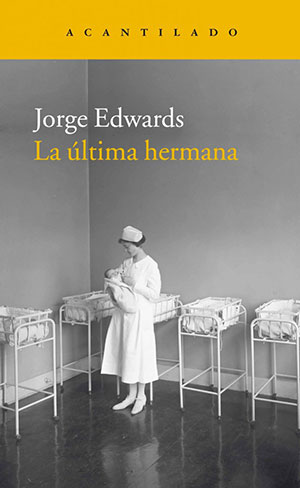 La última hermana, the latest novel by Chilean Jorge Edwards, is a compelling story about the cruelty of war but also of a courage born of human compassion. Set in Paris in 1942, during the Nazi occupation, it tells the story of María Edwards MacClure, a wealthy Chilean aristocrat who, having moved to Paris after World War I, lives a privileged life in the French capital.

At first, María comes across as a frivolous, self-absorbed woman who is known for her social elegance. An art lover, she spends time mingling with celebrities, including Vicente Huidobro, Colette, and Picasso. But when the Germans invade Paris, María experiences a moral awakening and decides to help the French Resistance by becoming a volunteer at the Rothschild Maternity Hospital, where Jewish women give birth and are later taken by the Gestapo, never to be seen again.

Driven by a true sense of generosity, María, with the help of a friend, repeatedly hides babies under her blue nurse’s cape and takes them out of the hospital to give them up for safe adoption. Soon, however, she is suspected by the Gestapo, but in order to maintain her façade of neutrality, she continues to throw lavish parties that often include important members of the German military. When the war ends, María, broke and no longer able to support the children she has saved in Paris, is forced to return to Chile.

La última hermana is a moving novel that tells the story of a discreet, courageous heroine who lives up to the calling of her time. In sixty-nine chapters, Edwards has put together a fast-paced, riveting narrative, in which the author’s family memories and a rich imagination blend together well. He constructs a strong albeit elusive narrator who deliberately speculates about the book’s many historic and personal events—in the process, building a strong bond with the reader.

Jorge Edwards is not only a masterful storyteller, as this novel well proves, but at eighty-five, he remains an important protagonist of Latin American letters.