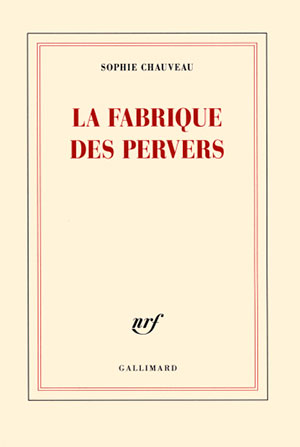 When Sophie Chauveau’s cousin Béatrice Meyer gets in touch with her after many years, it should be a cause for celebration. Instead, that meeting results in a very different kind of dynamic. For Chauveau realizes that, just like herself, Meyer had been sexually abused by her family members as a child. Together, they set out to determine how widespread that abuse might have been in the history of their large and prosperous clan. What they discover is properly appalling, and the story that Chauveau tells is one of panoramic dimensions, reaching back four generations, to the siege of Paris during the Franco-Prussian war.

Chauveau is abundantly conscious of the potential shock value of her story, and she exercises a great deal of tact and circumspection in order to avoid crude exploitation. She registers her conviction that this story must be told nonetheless, that someone must testify to this repeated, systematic abuse of the children in her family. For one thing, she is persuaded that her family was not the only one to suffer from this curse, as she calls it; she senses that many other families have been plagued by predatory males and strategically blind females; and she is aware, too, that the French judiciary system has long preferred to ignore the problem. In that perspective, Chauveau feels that her own family saga may be exemplary, as curious as such an idea may appear.

Alas, words fail her on occasion, on one hand because naming something serves in some sense to normalize it and render it legitimate, on the other hand because words are poor things when compared to intensely traumatic experience. “Incest,” “rape,” “pedophilia,” “predation,” “abuse”: each term designates only one corner of the phenomenon Chauveau is seeking to bring to light, leaving the rest in darkness. As a writer, she has always relied on words; now she frets that they will betray her. Yet she forges ahead nonetheless, impelled by the notion that the only way to end this behavior—both in her family and in society as a whole—is to testify against it as openly, frankly, and courageously as one can.