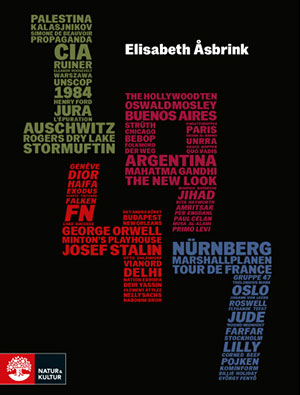 This fascinating, episodic study of the year 1947 is a microhistory of events, often meaningful for social rather than political reasons, that includes close-ups of the author’s family background. Elisabeth Åsbrink focuses on events in Europe with excursions to the Middle East and the United States. By 1947 the post–World War II chaos had settled a little; people had begun to deal with the ruins of social systems and political creeds as well as of buildings and to get a grip on what could be done next. The Nuremberg trials were underway, Marshall Aid was up and running, the UN just set up, and a united Europe at least under discussion. We learn about the British efforts, alternately ruthless and grimly funny, to back out fast from their imperial obligations in India and the Middle East; the machinations of other shattered empires, once run by the French, the Dutch, and the Japanese, are ignored—as are many other developments—because, to Åsbrink, they do not fit her story.

Her beliefs are those of a liberal, warm-hearted intellectual with strong loyalties to a central European Jewish family. She refuses to keep individual lives separate from “history” and places the Jewish question at the center of both her personal and political discourse. While the concept of crimes against humanity is subjected to legal scrutiny by Raphael Lemkin and transformed into literature by Primo Levi, an upsurge at solidarity is bringing old and new Nazis together; as the old guard goes underground in Latin America, new centers emerge in Europe. And, while the British just about give up on their intractable Palestine mandate, anti-semitism finds a new home in a Middle East where the Muslim Brotherhood and its jihadist version of Islam are growing seriously popular.

So many snapshots: Simone de Beauvoir goes to the US and falls in love; Dior follows, but his New Look is vilified. America tempts exiles, but a toxic mixture of racism and persecution of “un-American activities” is already claiming victims. US Navy Rear Admiral Grace Hopper is busy creating a new computer language; George Orwell is sick and mostly alone on an Hebridean island, but happy (we hope) in his work on his last book: 1984.

1947 is based on very wide reading but, unlike other such “year-centered” works, seems deliberately unacademic: not just because the selection of events is eclectic but also because there is no index or systematic notes; the set of cryptic, informal comments is maddening. But it is a wonderful example of a current semifictionalized approach to nonfiction: a readable, polemic, insightful, and often-moving inquiry into the past. The book is forthcoming in English from Scribe (UK) in 2017.