The Whole Harmonium: The Life of Wallace Stevens by Paul Mariani 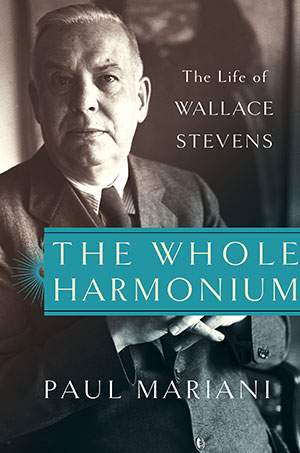 The story of Wallace Stevens’s life is one of the most paradoxical in the chronicles of modern poets. His poems are among the most elegant, rhythmically alluring, and imagistically lush in the English language. The man who wrote them led a lifestyle that was hardly exotic—he wore three-piece suits, had a reserved public manner, worked at an insurance company, and followed a daily routine that was monklike in its austerity. This disciplined regiment, Paul Mariani suggests, was instrumental in his success. Like Flaubert, Stevens purposefully kept the surface of his everyday life “regular and ordinary” in order to be “violent and original” in his art. Every night after work, he would climb the stairs of his Hartford home, shut the bedroom door (he and his wife had stopped sharing a bedroom early in the marriage), and settle into the luxury of being alone with the force of his own imaginative thought. Thinking itself was an intimate act for Stevens—he is the poet who shows us what it is like to think during the act of artistic creation.

Outwardly Stevens was not an ethereal presence—he was a large, physically robust man with a private social manner that could become gregarious when fueled by drink. He had what his friend Carl Van Vechten described as “a refinement of mentality,” an attachment to the artistic and intellectual life—fostered under the mentorship of Santayana at Harvard—that ran deep. Stevens’s love of abstraction—nourished by his immersion in art, music, and literature and by regular contact with a coterie of New York artists and poets that included William Carlos Williams, Van Vechten, Marcel Duchamp, and Marianne Moore—was central to his poetics, yet he always asserted that whatever was imagined was of necessity grounded in the real.

Not all biographers of literary figures manage to bring the dual tasks of telling a life story and providing meaningful analysis of the author’s work into balance, but Mariani consistently succeeds. Since he is himself a practicing poet, Mariani has an instinctive grasp of the process by which modernist poets achieved a mastery of their craft. His analyses of some of Stevens’s greatest poems—“Sunday Morning,” “Peter Quince at the Clavier,” and “The Idea of Order at Key West”—offer precise, penetrating interpretations without lapsing into academically ponderous language. Mariani also discloses interesting new information about Stevens’s life, including a physical altercation between Stevens and Hemingway in Key West and the influence of a relatively unknown poet, Donald Evans, on Stevens’s work. Mariani further suggests that Stevens’s Catholic baptism in the final weeks of his life constituted an authentic religious conversion, although it is possible to speculate that it may simply have reflected Stevens’s lifelong need to keep the externals of his life in order.

The Whole Harmonium does what all first-rate literary biographies should do—it beckons us back to a reading of the work itself. Easing back into Stevens’s poems, we find ourselves once again in the company of an eloquent lyricist with a highly original and charmingly playful mind.