No te ama by Camila Gutiérrez 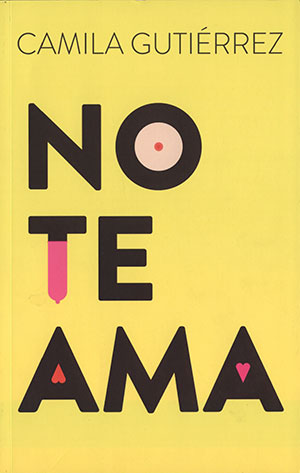 Those who know about literature know that what is easy to read is almost always difficult to write. That is the case of the work of the Chilean author Camila Gutiérrez, who appears in the young Chilean literary scene as a voice that is comfortably installed using transgression and humor.

No te ama (S/he doesn’t love you) is Gutiérrez’s second novel. This novel, apparently (or misleadingly) autobiographical, is a sort of continuation of her successful debut, Joven y alocada (2013). No te ama tells the story of Cami (a diminutive for Camila), a twenty-five-year-old woman who has a love relationship with two people of different sex. More than a story of lesbian love, this is a story of bisexual love. Despite its playful and funny tone, behind the narrator’s voice, many doubts come to the fore along with the fear and darkness that surround a life being played in two different fields. The fact that humor is probably hiding many tears is what makes the novel honest and especially courageous.

It is interesting to note that Gutiérrez’s writing style inserts itself—perhaps unconsciously—in a tradition fully established in Latin America by the Colombian writer Fernando Vallejo. No te ama does not pretend to stand out for having strong characters and a solid plot. What is important here is the narrator’s voice, her vision of the world, and the novel’s natural way of transgressing the most basic social conventions. Camila Gutiérrez, as Vallejo, plays at confusing the reader intentionally by using her own biography as the material for the novel. This mechanism (which is more a trick and a hook for the reader), although present in all of Vallejo’s novels, does not diminish the literary merit of Gutiérrez’s writings.

On the contrary, in both her novels, this young Chilean writer has succeeded at using this mechanism to create a personal voice that is unique and seductively convincing. The novel transgresses the traditional and moral conventions of the flat religious and heterosexual Chilean world, without the obligatory sense of guilt. It does this with humor, confidence, and wit. And in No te ama, wit shifts from scatology to tenderness, hence the excessive and stinging references to sex. Nevertheless, No te ama is not a novel about sex but about the search for love, a journey in which the searcher has sex with those she loves and with those she does not love as much. As in real life. Or almost.