Vessel and Solsvart by Berit Ellingsen 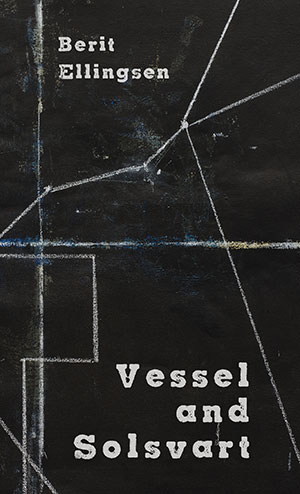 Vessel and Solsvart is a collection of five short stories, all dark fantasies dealing with the fine line between life and death. Norwegian author Berit Ellingsen’s writing is inspired by Scandinavian folktales and the work of H. C. Andersen, but her stories are much more sinister and menacing than these other tales.

The title story, “Vessel and Solsvart,” is the most interesting and well written in the collection. Two humanlike creatures wake up from what has been a long sleep in the middle of a lush and green landscape. Ellingsen’s ability to place us in the midst of this dark fantasy world with her vivid descriptions is the most remarkable feature of her writing: “The new heat reaches us from the seeping marsh, the lichen-veiled trees, and our soft bedding of moist sphagnum moss.”

Vessel and Solsvart, the main zombielike characters, appear to be some version of the walking dead, with milky eyes, missing fingers, and rotting hair. They complain that the sun is too hot, and it seems that they are searching for a way to keep from being consumed by it. They go on a bizarre journey, sometimes on foot and sometimes in their decrepit rowboat, and encounter strange towns that are completely deserted. They come upon peculiar places like the City of Trees and the City of Reeds. The story has a melancholy, eerie feeling to it as we are never quite sure of their final destination or if their bodies will decay to the point of not being able to carry them any further.

The other story in the collection that is as well crafted in its plot and writing as the title story is “Among the Living and the Dead.” This story is set in the eastern region of the Habsburg Empire in a small village. A physician is tending to a very sick patient that is on the verge of death. The patient is the rich lord of a town and lives in a lavish and highly fortified castle. We are never sure from what malady the patient is suffering, but he keeps drifting in and out of sleep as his physician tends to him around the clock. Angry villagers continually appear at the castle gates and demand that the doctor leave town and let his patient die. But the doctor feels that no matter how much of a tyrant his patient might be, he cannot abandon him while he is so sick. The ending is abrupt and grotesque as the doctor flees the castle in an attempt to save his patient from the angry villagers and utters this chilling statement: “I had heard stories about the living dead, able to flee themselves of any injury or illness, and subsisting on the humors of living beings.”

Ellingsen’s collection is a great read for those who enjoy descriptive, speculative fiction with an element of dark fantasy. Her ability to write vivid scenes and sinister story lines makes me curious to see what this author can achieve in a full-length book.