The Gardens of Consolation by Parisa Reza 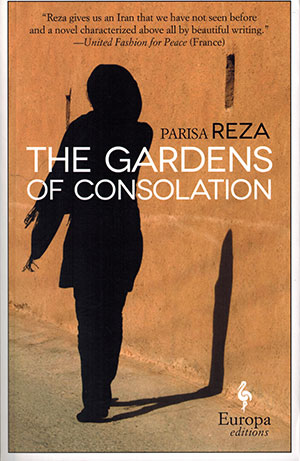 Parisa Reza’s novel The Gardens of Consolation takes us into the lives of an Iranian couple, Sardar and Talla, from their youth to their middle ages, later shifting its focus to their only son, Bahram. The story travels from rural Iran to its capital on a tapestry that stretches from 1910 to 1953, the year the US and UK-backed coup d’état toppled Prime Minister Mosaddegh from power, hindering the democratic movements of Iranian society.

The book opens with the twelve-year-old Talla and the twenty-year-old Sardar, married three years prior, leaving the village where “at the gates of hell and the source of Paradise, blooms Mohamed’s flower,” where the best rosewater in the country is produced. They travel through the desert all the way to Varamin, south of Tehran, where Sardar has already bought some livestock to make his living.

The book is divided into five chapters. The first chapter focuses more on Talla’s life in the village while she waits for Sardar to come back from Tehran and fetch her. The second is the story of the couple as they build their lives in Varamin and later in Shemiran and try to have a child. The remainder are focused more on Bahram’s life story; from a son of “peasants” to a young man accepted to university, trying “to distance himself from his background,” getting involved with political parties, and trying to figure out his relationships with women.

To tell the story of the Amir family, Reza chooses a style and tone that reminds one of a fairy tale. Reading The Gardens of Consolation feels like being on a flying carpet with your grandmother and listening to her telling you, in a nonchalant dreamy tone, a bedtime story about once upon a time in a fantasy world. It is magical, sometimes shocking and sometimes familiar. It dramatizes some details and disregards others, lingers on little moments and skips large spans of time, letting this family of three take you into the historical trajectory of a society undergoing rapid, vast changes—economically, politically, socially, and personally; domestically and internationally.

Throughout the narrative, Reza explains many of the historical events and aspects of this society—for example, its rituals and traditions, limitations, hopes, etc.—that are unknown to a reader who may be foreign to this world and people. Her style and tone, however, allow her to weave these explanations into the story while avoiding disruption of the narrative line, and instead letting everything flow softly together.

This ease could also stem from the fact that Reza’s original work is in French. The story is already in a language foreign to the language of the place and people she is writing about, aimed for a foreign audience, making it already a translation of sorts. It thus relieves the English translator from the need to accommodate that change of audience, wondering how to explain all this, risking harming the narrative flow and consistency by adding necessary fill-ins.

The aim of Reza’s narrative seems not to be providing its reader with complex characters or deep, multilayered analysis of its events but rather taking its readers on a long and widespread journey to this faraway time and place. If you approach The Gardens of Consolation with such a mind-set, you are in for a beautiful tour de force of a novel.