Belly Up: Stories by Rita Bullwinkel 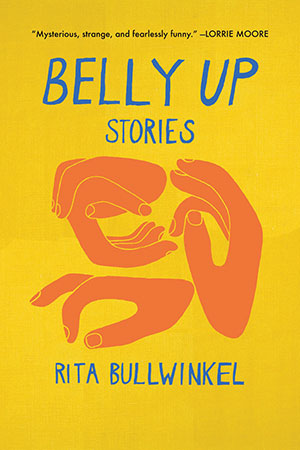 “Quirky and amazing” are the persistent words one might utter after reading each of the seventeen stories in Rita Bullwinkel’s debut collection, Belly Up. The stories are often told in plain-speaking prose reminiscent of fables but walloped with imagery that is pregnant with surprising twists—sometimes grotesque and disturbing, other times absurd and whimsical, but always original and highly innovative.

Several of the stories are very short, and these are the most enigmatic, as though Bullwinkel condenses several fleeting, bizarre images into impossible koans that the reader will never solve but will continually wonder over.

For example, in “Concerned Humans,” Karl is a snake who is disguised as a luscious pear, and after killing several children who discover his true identity far too late, he decides to simply be a pear in a tree, and a poisonous one at that. “A child bit into him, thinking it was a pear, and [t]here Karl lay, chewed in two, happily being seen and understood as the thing that he was: a poison pear. But wasn’t Karl also just a snake? A snake trying to find a way to eat that was respectable, and clever. . . . In this way Karl was and was not the thing he wanted to be.”

The longer stories are also written in fabulist tones with highly graphic scenes, but those are easily forgiven because the characters emerge as unwitting victims of their own naïveté and innocence in a world that is chaotic, brutal, and always strange. Grimm meets Borges.

All the stories have merit, but the most memorable are “Mouth Full of Fish” about two men, one in a wheelchair, going for a midnight swim; “Burn,” in which the narrator, a compassionate man, sleeps-on-demand with the widows of his recently deceased friends. “Décor” features a furniture-store model sending catalogs to an incarcerated murderer, and “Nave” is a very short story in which the narrator is eaten by the floor of a church, “the stomach of God.”

“Clamor” the concluding story, is the most poignant and unsettling in the collection. A medium hosts a séance for a group nursing their own sorrows. The medium not only summons the dead spirits but also foresees the living participants’ futures.

Belly Up is indeed quirky and amazing and a stunning debut by a rising new literary talent.