Farewell, My Orange by Iwaki Kei 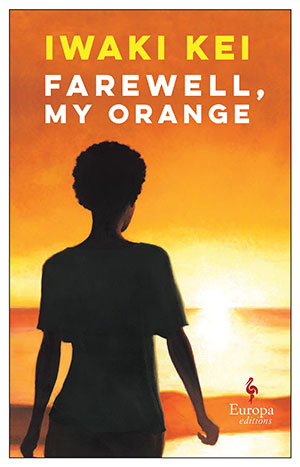 The orange in the title of Iwaki Kei’s stunning debut novel, Farewell, My Orange, does not refer to the citrus fruit. It is the brilliant color of the sunrise as it “drip[s] fresh and sweet from deep within the slightly oval disc of the sun.” It provides comfort and stability to one of the main characters in her native land.

Like the clever, allusive reference, the slim novel itself is sly and deceptive. Ostensibly, it appears to be about immigrants, friendship, family, and education. But it is also overwhelmingly about language—its power, its influence, its effects—and its ability to create worlds—physical and emotional, real and imagined. There are clues from the start that the book may not be what it seems. Several hints early on suggest a reader needs to pay close attention to the stories being revealed.

To begin with, characters appear to have more than one name. The apparent leads, Salimah and Sayuri, immigrants from Africa and Japan, meet in an English-as-a-second-language class in a small Australian town. They are also variously called Nakichi and Echidna. Salimah’s skin, like Nakichi’s, is as “sleek and glossy as fine tanned leather”; Sayuri’s black hair is as “hard and straight as an echidna’s [a spiny anteater] quills.”

There are two distinct narrative threads in the novel—Salimah’s and Sayuri’s. Salimah’s tells the story of her life in Australia, her flight in a “mass migration” with her husband and two sons from the “sun and sand” of the “desert country” of her native land. Dealing with “fear and trepidation” and the “pressing problem of language,” Salimah takes a menial job at a local supermarket. There, she cuts and packages meat and gags from the smell of the “scarlet blood . . . that clung filthy, weary [and] listless” over the “stark white tiles of the workplace’s four walls.”

Sayuri’s story is told in the form of letters to a former creative writing teacher. She finds that “in a foreign country, language’s main function is as a means of self-protection and a weapon in one’s fight with the world.” She aspires to be a writer and for much of the novel details her struggle with the “cultivation of the written word, the language that sustains thought.”

The two stories intersect in the ESL class and then in the supermarket after Sayuri suffers a loss and seeks mindless employment. Together, the women shape new lives forged from the bonds of friendship with “these dear people, this dear time, these dear things.”

Farewell, My Orange deservedly won both the Kenzaburō Ōe and the Dazai Osamu prizes. Its final pages take a major turnaround with a knockout of an ending. As the setting sun offers “endlessly enduring hope” to one character, it offers solace to another. Or perhaps it is one sun and one story seared together by one language that serves to protect both characters. This heartbreaking novel demands to be read more than once.