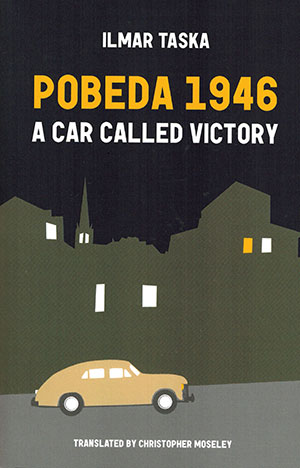 Estonian is a language that does not translate well to English. An approximate hybrid of Finnish and Russian, Estonian sentence structure, tone, and even vocabulary are so distant from Romance-language essentials that it is incredibly difficult to faithfully translate texts in Estonian to English in an engaging way. I experienced this in person when I lived there and struggled through labels, signs, and everyday conversations. Taken in a literary context, however, the disparity only seems to widen. The elaborate, image-dense diction and careful progress of narrative transition, so characteristic of richly written English, simply tend not to make sense in the sparse Baltic tongues, to say nothing of the differences in idioms.

Whenever I go into a piece translated from Estonian, I tend to be somewhat wary of the way narrative structure will build, knowing it won’t be in the manner I’m used to. Ilmar Taska’s Pobeda 1946: A Car Called Victory sets this difference to its advantage. A powerful thriller set in Soviet-occupied Estonia, this quick read pulls you along each cold railway and into every poorly lit office the characters encounter. One of the central points of tension in the narrative is the naiveté of a young boy, the son of a man condemned for his efforts to liberate his homeland. The boy has been shielded by his parents from the reality of the horrors of the USSR and its actions, but in shielding him, his parents have made the young boy an easy convert and informer for an unnamed and unethical agent of the Stalinist elite. Taska skillfully dangles the boy over the precipice of history for all 241 pages, his mother, aunt, and country barely holding onto his ankles.

Taska brilliantly brings to the forefront the contradictions inherent in idealism, secrets, and nationality, showing the imminence of disaster that accompanies every pen stroke, every train ride, when one lives under the surveillance of a dictatorship. Ultimately, however, I must give the thrust of my credit as an anglophone reader to Christopher Moseley’s masterful translation. Through careful structuring and witty literalism, Moseley has made universal a story so inherently regional, and for that I cannot thank him enough. “One has to preserve form so that content doesn’t disappear forever,” gripes one character, but this book proves that neither need be sacrificed, blending form and content, bringing both across time and space to grip the hearts of modern readers.