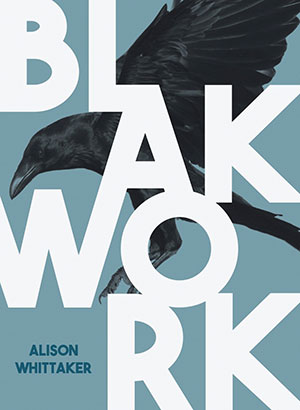 This discursively monumental collection asserts unwavering pressure on the idea of “Australia”; from within colonially bounded domains, where “One Nation voters eat[ ] lamb on Australia Day,” activist and poet Alison Whittaker asks that her readers look beyond mundanely whitewashed scenes, the 179 pages of Blakwork fed up with mindless gluttonies, racist hegemonies, and infrastructural violences. This book calls out the facile politics and narrow charades that pass for cultural life in that country; here is a voice seething with impatience, grief-stricken at the fate of this occupied place.

Divided into fifteen short sections, each title—“bloodwork,” “storywork,” “heartwork,” “groundwork,” and so forth—indicates just how much re-narrativizing is to be done within a country declared by its colonizers a little over two centuries ago to be Terra nullius. The first section, “whitework,” opens with the poem “blakwork,” and establishes the dialectical labor Whittaker’s texts seek to perform:

That dawdling off-trend meme,
white guilt. To survive among it: well,

it’s naff to say, but compul—
—sory to do. Indentured blakwork, something like;

nine to five, forgiv—
—ing you.

In this ever-necessary fight, here is a poet showing how the discourse of indigeneity must never be brought into the ideological service of epistemic whitework, nor simply subsumed by politically expedient gestures (a clear reference to then-Prime Minister Kevin Rudd’s generations-late apology to indigenous peoples, made in 2008).

Indeed, this book asserts a fastidious impulse and in that invaded, sheep-infested, bleating antipodean place of “nullius men” calling “oi there / boong-y slut—bra line legging line spaghetti strap / oi there!”, the tone remains aggressively elegiac, the styles always experimentally transgressive. In the section titled “the abattoir,” Whittaker momentarily shifts into prose fiction, perhaps indicating how, amid the barbarisms, so often the solace of poetry remains impossible: “We were hunters and gatherers and ecological strategists. Our old towns established by gubs to boil down tallow. Now, we gather up backstrap. We hunt cheap supermarket cuts. We adapt, always mediators of the squeamish line between life and the lives we have to take to keep living.”

Perhaps this is the book’s greatest value, and Whittaker fearlessly provokes anew a conversation in which indigenous Australians can hope to do more than simply survive. She writes of how “Blakness [is] a code embedded in your bones,” the spelling signaling a disruptive dialogical intent that will function both orthographically and genetically, these cudgel-like poems empowering alternative modes of speaking, knowing, and being.

In his blurb, John Kinsella suggests Blakwork “undoes all polite colonial conventions that have been used to mask the ongoing horror” and regards Whittaker’s poetry as “a living tool.” Perhaps this book is a key to portals opening onto precolonial symbolic orders; or perhaps, in that land of traumascapes, Whittaker’s syntactical interventions seek to commune with genocidal pasts and beyond while simultaneously calling ahead into the future. In making that call, Blakwork expands horizons of possibility beyond instrumentalized domains, and, in its own brilliant ways, this book is an act of war, its sounds and shapes acting as both chthonic echoes and epistemological landmarks. This Gomeroi woman, Fulbright scholar, law researcher, and essayist is a force. Alison Whittaker is Australia’s most important recently emerged poet.