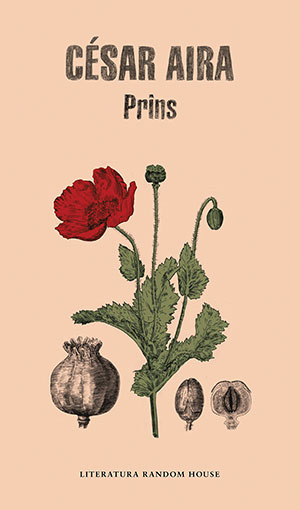 Depending on who keeps count and what his various publishers do, Prins is César Aira’s 101st book and 71st novel, and by the time this review is published, there will be more of his challenging prose. Praised by Patti Smith for reasons similar to her acclaim of Bolaño, the sole living Argentine master habitually makes incompleteness and opacity an ingenious contrapuntal homage to his sometime masters. Afflicting the comfortable, he avers that breaks with the past, like the Duchampian avant-garde he favors, may not be as radical as believed. He also assays realism in theory and practice—finding no paradox in preferring it to commercial fiction—and asserts he doesn’t read younger contemporaries.

Prins is a search for authentic thrills, like many of Aira’s previous short novels. If the “autobiographical” is difficult to confirm in them, like Prins, the recent Una Aventura and El gran misterio can be termed homeopathic performances, a detectable turn in most of his novels available in English translation. Even when there is no empirical “there” there, a bifurcated “César Aira” pops up, dazzlingly compulsive and hilarious in his novelistic trials. Given that backdrop, Prins and its loose plot reveal a subtext: the healing power of literature as a topic of concern for literati worldwide, from Walser to Aira and motley millenials.

Like the narrators in El gran misterio, Aira’s goal is not to knock down doors but to try many keys at random, reduce the unknown, but not before analyzing whatever “the great mystery” is. In that regard, Prins surges from an urban legend, the architect Arturo Prins, whose plan to build a gothic university in downtown Buenos Aires about a century ago displeased him and everyone involved, aesthetically and financially. Frustrated by his uncompleted masterwork and bad luck, he killed himself.

Aira turns that story into one about a writer of commercial gothic novels who, aware of his work’s puerility, stops writing. He spends his time consuming opium, delivered by a dealer adamant to stay in the narrator’s house indefinitely. Meanwhile, his ghostwriters have become a criminal Buenos Aires gang that acts according to standard gothic tales they had written before (in interviews Aira states he has read every gothic story).

Within that story there are quibbles and pontifications about what literature is or what a writer does and of course about the avant-garde as a kind of sabotage. Humor, along the lines of Buster Keaton and Monty Python during a bus trip across central Buenos Aires with a stranger named Alicia (following a real route that Aira takes), and sensuality are not absent from those digressions; nor is the sense that Aira is going somewhere by going nowhere, since after all he is contributing to the commercialization of other conventions.

If “it’s complicated” could summarize Aira’s writing, Prins is a magnificent reappraisal of what he is up to now aesthetically, which is summarized in the last sentence as creating worlds in which reality has little to do with what he has called “dreamlike realism” and more with a novelist’s efforts to preserve his genius in a world that can know everything.