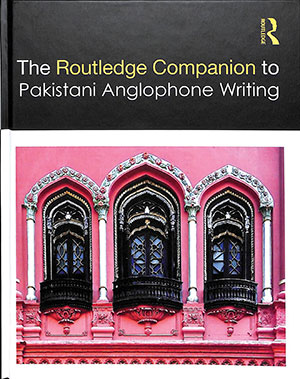 The Routledge Companion to Pakistani Anglophone Writing is a stupendous collection of essays, serving as a comprehensive preamble to historical, regional, local, and global issues ambient to cross-cultural relations, which are imperative to the reading of Pakistani anglophone literature. It covers the foremost issues such as terrorism, fundamentalism, intolerance, global security, and alienation in thirty critical essays. In addition, the book is a comprehensive and significant step toward the corollary of a transnational perspective of canon construction in Pakistani literature.

Controversies and transformation have been observed in Pakistani anglophone literature since 1947. This companion reinforces the “presentness” of historical contexts, reminiscence, and their prodigious pertinence to what we think of as contemporary Pakistan. It includes eight parts, pursuing the basics of a historical understanding of Pakistani anglophone literature. Each part is interrelated to historical incidents such as civil wars, migration, ethnic and sectarian crises, and gender while covering minority issues such as Islamization, Talibanization, violence, otherness, and military dictatorships.

For example, the earlier addressed phenomena of context and connection are hard to cover completely without political and social adherence to major historical events in Pakistan during General Zia’s dictatorial period (1977–88); the US-led Afghan jihad; Talibanization of Pakistan in the 1980s; the US attack on Afghanistan after 9/11; and the post-9/11 war against terrorism and religious and sectarian rivalries in the region based on multigenerational ethnic and political issues in the years of partition, first in 1947 and then in 1971.

Through the interconnectedness of historical contextualization, the first two parts deal with partition events of 1947 and 1971 and the readers’ understanding of how partition continued to spatialize non-Muslim Pakistani identities, reassessing the forgotten national narrative and angularities in the “post-memory generation.” Part 2 links these angularities with the US-led Afghan war, 9/11 attacks, and Islamophobia along with stereotypes that Muslims and especially Pakistanis have experienced during the war against terrorism.

The essays in part 3 underscore human rights contested widely in the Pakistani context, the subtlety of regional and local cultures and human agency as correctives to neo-Orientalized versions of operating dialectics: who says what, when, and why from what side of the power divide. The next two parts focus on vengeance and the complexity of Pakistani religious, social, political, and cultural contexts and history, including shifted gendered identities and multiple modalities of generation, sexuality, and nationalism. Part 6 critically evaluates the ways in which the sense of belonging and identity are addressed by the gestures of mobility and space.

The last two parts present a thorough history of colonization and its contesting identities in which the comparison of narratological perspectives highlights the narrative unsteadiness and new horizons toward a Pakistani idiom. Pakistani diasporic authors act as interrogators of exoticism for metropolitan audiences and readers and take into consideration ideals and ideas about the literary canon; they investigate the “normative,” “curatorial,” and “dialogical” attributes presented by various types of Pakistani anglophone literature.