The Future Has an Appointment with the Dawn by Tanella Boni 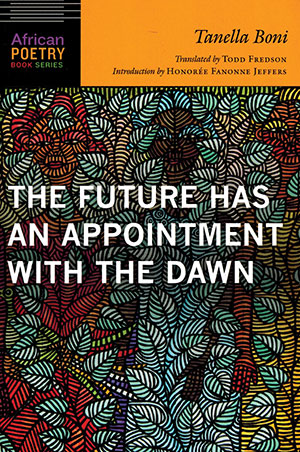 I was introduced to the riveting work of Tanella Boni, a critically acclaimed Ivorian poet and novelist, while reading A Rain of Words (2009), considered the first comprehensive bilingual anthology of poetry written by women from French-speaking Africa. Aware that English-speaking readers hear so little from francophone African poets, let alone francophone women poets, I was drawn to Boni’s female point of view describing the ethnocultural violence tearing apart Africa, in general, and the Ivory Coast, in particular.

The Future Has an Appointment with the Dawn is Boni’s first full-length volume of poems to be translated into English and continues Boni’s quest to find “letters / for the perfect word.” The age-old conflict between good and evil is played out in Boni’s juxtaposition of such themes as the magnificence of the natural world, young lives full of promise, and the “rare pearls in the water of Kindness,” with the current Ivorian political state of affairs, where “the hands of plenty . . . / weave their barbed wire” and where “daily lives [are] placed among the objects for sale / at the market rapacious for our distressed skins.”

This compact collection is composed of two main sections, entitled “Land of Hope” and “A Murdered Life,” with units that can stand alone but which work together to create a powerful and almost overwhelming narrative of horrific proportions. Boni’s language is restrained and sparse, but a deep lyricism infuses the texts. None of the poems are titled, and, except for a capital letter at the start of each unit, there is no other punctuation. Though Boni never gives in to self-pity or hopelessness, neither does she allow herself the luxury of giving in to false hope. Indeed, while she maintains a desire for hope, she is careful to differentiate a desire for hope and hope itself. Unflinchingly, she ends the book on a somber note: “How to speak the beauty of the world / when life’s hope / crumbles like yarrow.” The perfect words do not yet exist.

Todd Fredson ably captures the images, structure, and tone of Boni’s poetic landscape in a project supported in part by the National Endowment for the Arts. No doubt Fredson’s extended visits to the Ivory Coast (first, as a Peace Corps volunteer, and then as a Fulbright Fellow), as well as the fact that he is a prizewinning poet in his own right, have informed this exciting translation.