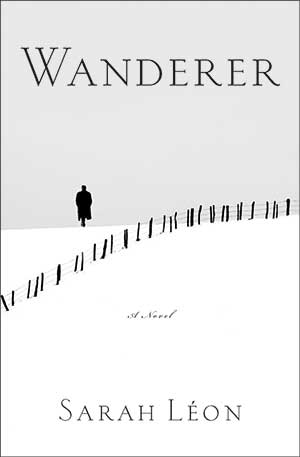 This is a first novel, written by a very young author. The French original appeared in 2016 when Sarah Léon was barely twenty-one years old. Part of the charm of first novels is that their authors typically try to pack them full to the brim, and Wanderer is no exception.

It tells the story of Hermin Peyre, a composer who has chosen to live and work in the rugged landscape of the Bourbonnais Mountains, in central France, and of Lenny Wieck, a young German pianist with an international reputation. Twelve years previously, when both were living in Paris, Hermin had taken Lenny under his wing to arrange for his musical education, and they had become close friends. But Lenny left Paris one day, abruptly and without explanation, and the two have had no contact for a decade. Now Lenny has arrived at Hermin’s mountain cottage, in the dead of winter, once again without explanation. He seems to be ill; he has canceled his concert schedule; he is looking for something that Hermin may not be able to provide. “What common ground could there be at this point between the composer holed up in the depths of the forest and the young pianist with the entire musical world at his feet? Love for Schubert, no doubt; but what else?”

Franz Schubert looms large here. Chapter titles borrow the names of his compositions; Hermin is working on an Homage to Schubert; and certain famous pieces, notably the Wanderer Fantasy and the Winter Journey, echo throughout these pages. It has been said that one of the characteristics of nascent Romanticism is the display of extreme emotion, and in the very confined space of this tale there is more than enough Sturm und Drang to go around, as Hermin and Lenny strive “to get out from under the double burden of a painful past and an uncertain future.” Passages of flashback to the time of their previous relationship are intercalated with narration in present time; the latter is told in the third-person omniscient, while the former are narrated by Hermin in the first-person singular.

Some readers may find that technique to be contrived and a bit tired. Yet most will agree that Sarah Léon has interesting things to say about friendship and love—and about the way that those two registers of feeling vex each other.