The Piranhas: The Boy Bosses of Naples by Roberto Saviano 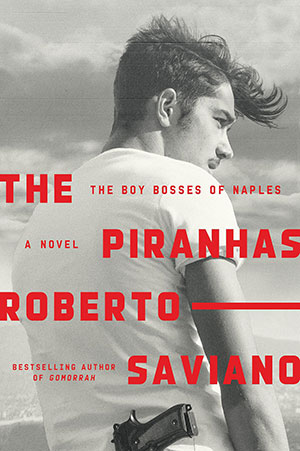 Heroism in journalism seems to be one of the major themes of our time, and by almost any standard, Roberto Saviano is one of the most heroic. His book Gomorrah (2006) exposed the corruption from the bottom to the top of Neapolitan society, resulting in a worldwide best-seller, an internationally acclaimed motion picture, a television series, and numerous arrests. It was so accurate and insightful that for more than a decade, Saviano has been under the round-the-clock protection of the Italian government to prevent his being murdered. Accompanied by armed guards wherever he goes, he must change residence on an unpredictable basis, often sleeping in police stations. All this is certainly a hindrance to his carrying out his profession as a journalist.

The Piranhas: The Boy Bosses of Naples, his latest book, is a novel based on his thorough knowledge of organized crime in Naples and may well have as much fact in it as fiction. This kind of hybrid has the appeal of what is sometimes called “faction,” but it usually results in something not as emotionally insightful as the best novels and not as reliable as the best nonfiction. The main character in The Piranhas is a boy of fifteen, Nicolas Fiorillo, who is involved in several petty crimes—thievery, vandalism, drug dealing, and other general nastiness that takes a strong stomach to read about. Nicolas is also an avid reader of Machiavelli, no less. A power vacuum develops when the senior Camorra leaders in his community are “ratted out” and jailed. Nicolas sees no reason a fifteen-year-old like himself can’t run the local rackets, so he schemes to take over, opposing his elders, ultimately graduating to murder. The story of Nicolas is planned to continue in another novel to be published in the US in 2019.

The Piranhas’ best strength is in its characterization. The members of Nicolas’s gang are, after all, teenage boys, and convincingly portraying that mind-set is a challenge for any novelist. But except that the gangsters are boys, the story itself is much akin to traditional gangster sagas, like Little Caesar, and events unfold as might be expected. The translation, unfortunately, is one of those that reminds you on almost every page that you are reading a translation, as it struggles to convert Neapolitan street slang to a not-quite-believable English equivalent. Frequently, phrases and words are given in the original, followed by a translation. A bit of that goes a long way, contributing to the overall feeling of emotional detachment.