This Mournable Body by Tsitsi Dangarembga 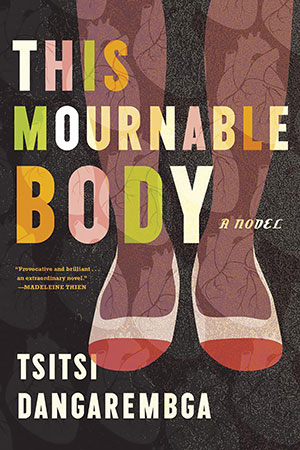 This Mournable Body continues the narrative of Tambudzai, the protagonist from Tsitsi Dangarembga’s critically acclaimed novel Nervous Conditions. This Mournable Body engages strongly with the politics, economics, and culture of Zimbabwe in the late twentieth and early twenty-first centuries while highlighting the lives and trials of its women.

The title of the novel references “Unmournable Bodies,” Teju Cole’s 2015 essay for the New Yorker. The “unmournable bodies” in Cole’s essay are military combatants and civilians whose deaths are “not meaningful” to westerners for a number of reasons. Dangarembga turns the phrase on its head by drawing attention to a body’s right to be mourned regardless of ideological convictions. The novel focuses particularly on women’s bodies, which suffer a tremendous amount of physical and emotional abuse throughout the narrative but also display amazing strength and resilience.

This Mournable Body follows Tambudzai’s attempts to improve her financial situation and social standing after leaving a job as a copywriter. Her efforts are met by indifference until she takes a job as a biology teacher—for which she is woefully unqualified. After many attempts at improving her lot, she suffers a nervous breakdown and is forced to engage with her tragic history at the family homestead. Ultimately, betrayal becomes the theme of the novel, but the real question is: Who betrays whom? Does Tambudzai betray her upbringing? Does her family betray their daughter? Do corrupt politicians and guerilla fighters betray the country they claim to serve? Or is it the idea of an independent Zimbabwe that commits the ultimate betrayal, making promises it cannot keep?

This Mournable Body highlights these problems, and more, while alternating between beautifully rendered English-language and Shona-language text, but it does not provide many answers. Instead, it draws its readers into the narrative through the frequently occurring second-person
pronoun, “you.” “You” thus becomes one of the characters taking action throughout the novel. In this manner, the novel’s structure makes readers complicit in its story and also a part of contemporary Zimbabwe. This practice renders its people familiar enough to become “mourned.”