The Carrying by Ada Limón 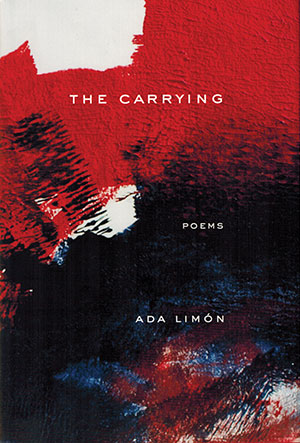 Ada Limón’s breathtaking new collection opens with “A Name,” a poem that asks whether Eve, when she named the animals, “ever wanted / them to speak back,” if she wanted to say to the animals, “Name me. Name me.” It is an appropriate opening piece because many of the poems are attempts at starting conversations, often about difficult matters. The poet repeatedly reaches out, to her readers, to flora and fauna, to her loved ones—the desire for connection, for generous reciprocity, is the dynamo that drives the book.

The Carrying, as the title implies, explores the costs of the physical, emotional, psychological, cultural, and social burdens we carry. For Limón, this includes the inability to have a child, a “crooked spine,” disabling vertigo, and panic attacks. The collection also considers the gifts we receive, particularly from the natural world and from those we love. It also prods us to do our part to make a better world from the one we’re surviving in now.

Of the sixty-two poems in the book, in at least thirty-six of them, nature imagery is central to the poem, often serving to introduce the turn. Limón’s relationship with natural things is expressed as an elemental kinship, one of the modes of connection expressed in the collection. In “Ancestors,” the poet declares she has “come from” rocks and trees and “the lacing patterns of leaves.” In “On a Pink Moon,” she plants seeds, one to “Cling and remind me— / We are the weeds.” She “root[s] / for that persecuted rosette” of the dandelion and finds peace while weeding her garden where even the humble burying beetle is recognized. It is impossible in this limited review to explicate the myriad ways in which nature in Limón’s poems is stubbornly itself—never romanticized—while, at the same time, serving as foundational imagery within the worlds of the poems. The speaker in these poems is richly embodied, sweating and hurting and feverish, a human animal alive and electric, messy and magnificent.

Limón returns to “naming” later in the book, in “Against Belonging.” In the poem, the speaker relates that, as a child, when she learned the names of “all the grasses, the tide pool animals, the creatures of the redwoods,” the process was “more like creation” than science but that, as an adult, she gives “names to everything now because it makes / me feel useful.” However, sometimes she resists the limitations involved in “naming” herself in deference to “what cannot be tamed, what shakes off citizenship, / what draws her own signature with her body / in whatever dirt she wants.”

The resistance to cataloging, to classification, resonates with the political poems of the collection—the power of naming in the Garden of Eden was given to humans to divide them from nature, to set them above the rest of creation. Today, it’s often used as a method to reduce human beings’ marvelous complexity to denominations simple enough to enter on various forms: a census, a search warrant, a political ad, a death certificate. Name, race, gender, occupation, political party, nationality. Despite the speaker’s desire in the opening poem for “naming” to be a reciprocal relationship, labels are most often applied by the powerful to the powerless like the ones found beneath a pinned beetle.

What is the answer, then, to resisting reductive naming, to negotiating the minefields of contemporary life? In the poem “The Leash,” the poet asks, “How can you not fear humanity?” The answer is an attempt at connection and an exhortation to persevere: “Reader, I want to say: Don’t die.” To live, in the structural logic of the book, is to engage in reciprocal, caring kinship with all beings—we are fortunate to have Ada Limón’s powerful, intimate poetry to guide us.