The Sound of Listening: Poetry as Refuge and Resistance by Philip Metres 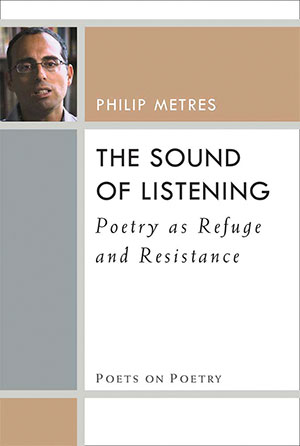 As director of the Peace, Justice, and Human Rights program at John Carroll University, Philip Metres might be expected to champion political poetry; after all, the subtitle here is “Poetry as Refuge and Resistance.” As he makes explicit, however, “poetry is never merely an extension of political rhetoric.” His work is certainly a poetics of advocacy, but he tries to differentiate the politically vital from the rhetoric of politics. Against ancient notions that poetry gives instruction and pleasure, Metres prefers the late C. D. Wright’s axiom: we read “to be changed, healed, charged.” Or, to use a classical term, to attain metanoia—an altered vision of life.

This book is a collection of Metres’s writings over the past decade. Collections like this can be a tad repetitive, but Metres’s is relatively free of that occupational hazard. Nor is it merely a miscellany. The focus is steady on reading and writing poetry beyond how those practices may exist in the mainstream; poetry’s “cultural work,” besides refuge and resistance, involves “recovering silent voices” and “imagining and modeling a more just and peaceful world.”

One of the immediate attractions of this collection is that it is actually about world poetry. Yes, American and a healthy number of Arab American poets are represented, but poets who write in Greek, Hebrew, Arabic, Polish, and Russian are also surveyed, plus a fine meditation on translation. (That essay made me want to read more about its poet, Arseny Tarkovsky.)

Metres divides his book into essays and portraits, but there are actually two kinds of each, I think. Some of the portraits are self-portraits, whether as interviews, dialogues with collaborators, or personal meditations, such as the lovely rumination on memorizing poetry. The other portraits center on individual poets. Most winning is the one about Adrienne Rich, largely because of its evenhanded tone, its lack of agitprop, at the same time arguing for the prominent position she rightly holds.

The essays also tend to fall into two categories. One is comprised largely of cataloging, such as those on Arab American poetry after 9/11 and on “Poems for Peace.” These pieces are more crafted than “cataloging” suggests, more like Cornellian cabinetry, as the latter essay, for instance, juxtaposes Archilochus and Sappho with Aharon Shabtai and Naomi Shihab Nye, among many others.

The second kind of essay is more theoretical, or at least speculative. In the longest chapter (thirty pages), Metres discusses “documentary poetry” or its “overlapping practices” (“investigative poetics” or “social poetics”) in which the poet becomes “alternative historian, detective, philosopher, radical text-worker, etc.” Another essay of this kind is about what Metres calls “lang/scapes” where “words [are] sutured into landscape.” Another essay elucidates a “disembodied poetics” that removes the poet entirely as embodied speaker (as in slam and performance poetry, for example), instead inviting other bodies into “an active and changing multidimensionality” of co-authorship.

There is one final essay/portrait that seems to fall in both categories, and it was for me one of the many highlights in this information-rich book. “Homing In,” only ten pages, calls for a “cosmopoetics,” a practice mixing “cognitive mapping,” a term derived from Fredric Jameson, with what is essentially Ignatian meditation, derived from Metres’s own Loyolan schooling. Seeking a poetry that “is also a technology of embodied inquiry” fit for the digital age, Metres’s exploration takes us from Rumi’s notion of the wound “where the light enters you” to that crack which, according to Leonard Cohen’s lyric, lets the light in.

In short, this anthology is an admirable addition to the ninety-six other volumes in Michigan’s distinguished “Poets on Poetry” series.