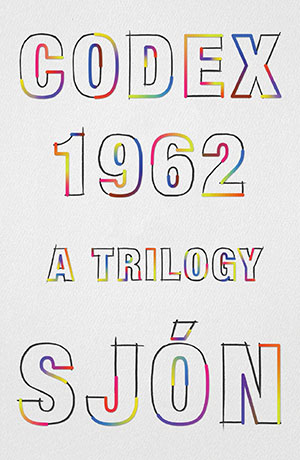 Icelandic author Sjón’s masterful tome CoDex 1962 is now available in English translation—and this is cause to celebrate. The work is in three parts, identified as “a love story,” “a crime story,” and “a science fiction story,” but what it really is is an intellectual playground, one where the author can exercise his considerable gifts roaming modern Western civilization. In spirit, this novel feels like a noble descendant from Bulgakov’s The Master and Margarita, which Sjón describes as a formative early influence. This places it in such immediately contemporary company as Georgi Gospodinov’s The Physics of Sorrow, Louis Armand’s The Combinations, certain works of Pynchon, and so on. Yet as with all such works, it’s not the categorizing, of course, but the work’s own strikingly individual, grounded yet independent streak that is such a delight.

Sometimes sentences balloon to nearly Krasznahorkai scope and complexity; in other places, traditional dialogue and pacing situate scenes squarely in more familiar twentieth-century literary territory. References permeate throughout, making this work less distinctly a novel at times and more a metacommentary—a sort of thinking script, which benefits the more cultural ballast one can bring to it. Pushkin and Kafka seem as present at times as the book’s ostensibly main cast: Leo, Marie-Sophie, Karl, the Archangel Gabriel, and all the rest.

Principally, it is a satisfying romp of forms. Fragments, scenes, and ideas, filtered through a kaleidoscope of textual lenses, do all hold together, by sheer authorial force of will, even though this text was first published as three separate novels in the original Icelandic. Behind all this play, of course, lurk serious matters. The author has been quoted as saying that CoDex 1962 is “a novel about a dying man trying to find a place for himself within the grand narrative of human history.” The story revolves partly around a new version of the Golem myth, of a man created from clay. Sjón was motivated in part by the very real story of the one known Icelandic citizen who was interred in and survived a Nazi concentration camp, to return to Iceland, in updating this myth of possible redemption—transposed now to Iceland in particular and the West more generally.

Yet there’s certainly no lecturing tone here. The writing continually mutates—from tale to listicle, from parody to philosophy, quasibiblical to outright farce. Scarcely nothing in its trajectory escapes the narrative’s incisive crosshairs, as the work wends its way largely in the time frame between World War I and an artificially intelligent present.

Whatever the gravitas of the subject at hand, however seriously a scene may begin, the narrative is always ready to be dragged off course, over-the-top, sometimes quite literally: “The berserker went berserk. He took to his heels in mad flight from his inner self, launching himself off the hill and hurtling in a great arc over the cluster of huts, all the way north to the Arctic Circle where he landed in such a violent belly-flop that every single bone in his body was smashed to smithereens.” This passage could well be a description of the narrative approach itself.

Sjón is known as one of Iceland’s top writers. With CoDex 1962, his place in English is strengthened, especially with this rigorously empathetic translation by his longtime collaborator, Victoria Cribb. She gets so much right here, transposing the author’s myriad playful ramblings into transparently suitable replacements in English, right down to the mock accents and other descriptive vagaries that would otherwise just not translate. This novel is a wonderwork—and an insistently sheer joy to read.