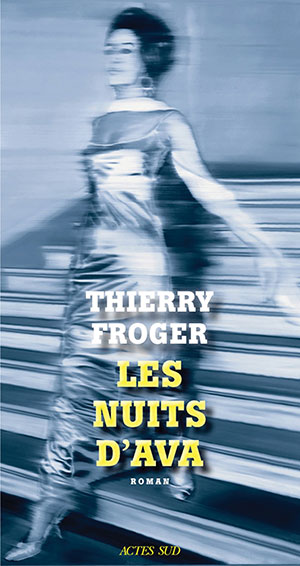 In Les Nuits d’Ava, Jacques (the narrator) and Rose are back, but this time they are paired with the actress Ava Gardner and the painter Gustave Courbet, perhaps best known for his (in)famous work L’Origine du monde (1866). Throughout the novel, three narrative strands (Ava / Courbet / Jacques and Rose) constantly alternate, generally with no transitions between them. As they become progressively more intertwined, the storylines, in spite of their obvious differences in terms of time and place, start to influence and illuminate one another, to such an extent that each successive storyline seems to be a palimpsest of the previous one.

The narrator’s youthful obsession with the beautiful American actress constitutes the starting point of Les Nuits d’Ava. Many years later, Jacques, who is less than enthusiastic about his duties as a history professor, takes a leave of absence, ostensibly to research a tantalizing anecdote that may have occurred during the filming of The Naked Maja (1958). In Froger’s narrative, Ava Gardner, bored with her role in a mediocre film and with the eroticized public image imposed upon her by Hollywood typecasting, decided after a night of drinking and partying to pose secretly for the cinematographer’s camera, thereby photographically reproducing famous paintings of female nudes by Titian, Velázquez, and Courbet. The mystery of what may have happened to those pictures echoes the circuitous route of Courbet’s scandalous L’Origine du monde before it finally found a home in the Musée d’Orsay in Paris. Jacques’s own past as a photographer, as well as his penchant for excessive drinking, are among the other elements that provide links between the three storylines. Instead of doing archival research, Jacques travels to Italy and the United States, in search of Ava’s pictures and, no doubt, of his own lost youth.

Froger, who is a visual arts teacher, amalgamates photography, painting, and cinema in his literary fiction. He also has his fictional characters interact with well-known actors, writers, politicians, and even mafiosi. The three intricately plotted narratives of Les Nuits d’Ava, as recounted in the narrator’s ironic, self-deprecating tone, constantly incorporate historical figures and events. At once entertaining and intelligent, this novel broaches serious topics without ever turning somber or portentous.