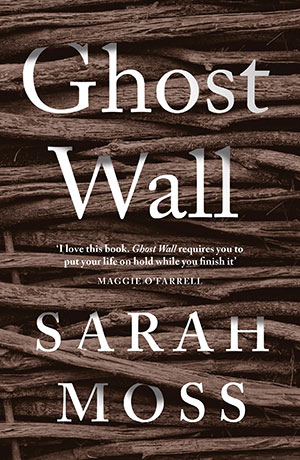 Early in Sarah Moss’s Ghost Wall, the narrator, a smart seventeen-year-old named Silvie, recalls accompanying her father to a history museum near their home in northern England. A bitter man who abhors the modern world, Bill Hampton rhapsodized about an exhibition of Bronze Age artifacts. “That’s where you come from,” he told Silvie, “those folk, that’s how it used to be.” Unfortunately, Bill is consumed with the crackpot idea that his once-pure country has been sullied by immigration. He channels his rage and insecurities into historical reenactments, one of which is at the heart of Moss’s harrowing novel.

The reenactment is meant to mimic life as it was lived 2,500 years ago, and so the participants—Bill, his wife, Alison, and their daughter, Silvie; an archaeology professor and a few of his students—are roughing it in a wooded area near the North Sea. They pick berries, gather mussels, and cook their meals over an open fire. Most everyone tries to keep the mood light, but Bill, a stickler and a sexist, criticizes the students’ store-bought tents and expects all involved to observe outmoded gender roles. Worse, when he sees Silvie bathing topless in a stream, he takes her aside and beats her with a belt.

Inspired by an ancient tribe that was said to have built a defensive “ghost wall” out of human bones, the campers collect rabbit and sheep skulls, intent on constructing a small replica. The project awakens something primal in the male members of the group. Soon, the increasingly febrile men begin planning another primitive ritual, this one centered on a shocking act of misogyny.

The author of a lauded memoir about living in Iceland, Moss writes beautifully about the natural world, and she’s incisive when discussing the dynamics that emerge among strangers in close quarters. But this is more than just a story about a horrifying misadventure in the woods. Moss has written a feminist parable for an era in which an American president promises to build an insuperable wall and Brexit-supporting Brits are erecting barriers between their country and the rest of Europe. An unflinching depiction of tribalism and sexism, Ghost Wall is an intelligent work of fiction, one in which a character’s baleful misunderstanding of the past helps explain our fraught present.