In Search of Lost Books: The Forgotten Stories of Eight Mythical Volumes by Giorgio van Straten 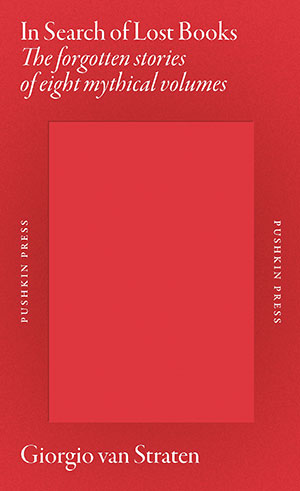 Giorgio van Straten’s day job as director of the Italian Cultural Institute of New York seems to have been tailor-made for him. He is a public intellectual whose interests seem as wide-ranging and omnivorous as any true polymath. He has written books, translated the works of others, and serves as an editor. He is the author and presenter of the institute’s wonderful video series, “Il Novecento racconta il Novecento: Rubrica letteraria a cura di Giorgio van Straten,” a series of short editorials on Italian literature.

His second and latest book to appear in English is the enchanting In Search of Lost Books. The book takes its reader on a journey in search of eight “lost” volumes that, as the subtitle states, have assumed mythical status. As van Straten explains: “For me, lost books are those an author did in fact write, even if they might not have been brought to completion: books that someone has seen, or even happened to read, but which were subsequently destroyed, or vanished leaving scarcely a trace.” He informs us repeatedly that this is just as much a personal journey as it is a journey for his readers.

The lost books van Straten is searching for are divided into eight chapters: Romano Bilenchi’s The Avenue, Lord Byron’s Memoirs, Ernest Hemingway’s Juvenilia (the contents of the infamous lost suitcase), Bruno Schulz’s The Messiah, Nikolai Gogol’s second part of Dead Souls, Malcolm Lowry’s In Ballast to the White Sea, the contents of a black suitcase Walter Benjamin was carrying at the time of his death, and, finally, Sylvia Plath’s Double Exposure. Most of these will be known to the well read, but others, like the Bilenchi text, may be new to the reader. The chapter on Bilenchi is also heartbreaking, as are most of the stories that appear here. Preceding the chapters is an introduction that lays the groundwork and the intention for such a search. Along the way, van Straten gives us the names of those who helped him, providing a network of fellow searchers.

In Search of Lost Books is a nearly perfect, albeit slim, text in which to lose oneself. It is the ideal companion for a short flight or train journey. It can be read on a bus or a subway, in a café or on a park bench. It reminds us that life, and all that we leave behind, is essentially ephemeral. In Search of Lost Books is also a kind of ghost story or cautionary tale about how we think of writers and their work, and the fragility of being human, thus making the work of art all the more significant and essential. The book is also a tale of global significance, taking the author and his reader across space and time and, of course, across languages.