As Long as the Tree Blooms: A Short History of Frisian Literature by Joke Corporaal 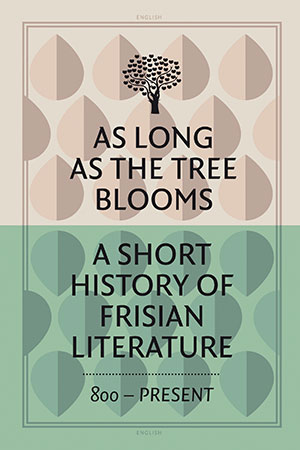 In 2018 tens of thousands of tourists from near and faraway places visited Leeuwarden on the occasion of its designation as the 2018 Cultural Capital of Europe. They discovered the province that makes the Netherlands bilingual.

Visitors saw traffic signs in Frisian, heard the language spoken in stores and other public places, heard music and the news in Frisian if they tuned in to the Frisian broadcast station, and if they visited Tresoar, the provincial treasure house of Frisian literary history, they encountered a world of information: countless newspapers and magazines, hundreds of thousands of books including some books from the library of Erasmus, manuscripts and letters by famous Frisians, a manuscript of “Noctes Atticae” made by monks and dating back to 836 CE, the oldest and most recent Frisian literature, and much, much more. They learned that there are some one hundred books published each year, comprising all the literary genres; that Frisian music includes classical, pop, folk, opera, hard rock, ballads, hymns, and more; that the more universal poetry by Frisian poets like Obe Postma and Tsjêbbe Hettinga has been translated into English; that best-selling prose authors like Rink van der Velde and Hylke Speerstra have been translated into English as well as Nynke van Hichtem’s classic children’s novel Afke’s Ten; that classics like the Iliad and Odyssey and Ovid’s Metamorphoses as well as works by Shakespeare, Nietzsche, and Tolkien have been translated into Frisian. And much more.

They may have wondered, where did all this come from—the language, the culture, the literature?

That’s where this compact introduction comes in. It’s a shortened evolution story of Frisian as a separate recorded language in the early Middle Ages to the flourishing of Frisian literature in our own time. In seven chronologically organized chapters, Joke Corporaal describes the most significant developments and characteristics of Frisian literature. The evolutionary trajectory was not necessarily a smooth one. It moved through periods of “mere scribbles,” ruralism, moralism, regionalism, Romanticism, experimentalism, and unabashed, raw realism since the 1960s. And all along the way there were tensions in visions and viewpoints. But there were also foundational pillars like Gysbert Japiks who, in the seventeenth century, elevated Frisian to literary status through the quality of his poetry, which was fit even for the literati and the academics at the Franeker Academy. Later, in the nineteenth century, it was the Halbertsma brothers who awakened Frisians to the charms of literature in their own language. In the more turbulent twentieth century it was Wadman, Riemersma, and others who aimed to push Frisian literature far outside its provincial boundaries, though many authors were content to continue to write and improve the quality of a more regional literature.

This short history is not intended for scholars but for students and a general public interested in learning more of the background and present story of what is known as Frisian literature. Its title is based on an Old Frisian poetic expression: “As long as the wind blows from the clouds and the grass grows and the tree blooms,” the law will last. And so will Frisian literature.