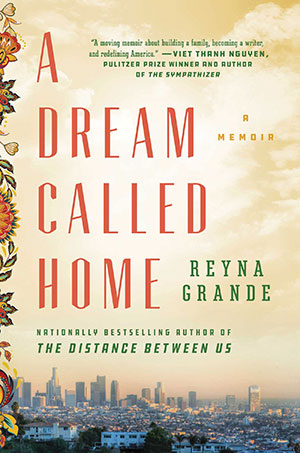 Reyna Grande shares her experiences as an undocumented immigrant from Mexico who, at age nine, accompanied by young siblings and a coyote, succeeded on her third attempt to cross the border near Tijuana. Her life story is a fascinating one, not only because of her willingness to be absolutely frank about her feelings and perceptions but for the impact the immigration experience has had on generations of families and the family structure.

When Grande was barely a year old, her father crossed the border to “El Otro Lado” (The other side) to find a way to earn money to send back to his family in desperately impoverished Iguala, Guerrero. Later, when Grande was five, her mother also left to join her husband in California. Feeling abandoned in Iguala, Reyna was left in the care of relatives who were often cruel. When she was nine, her father was able to send money for the passage to “El Otro Lado.”

A Dream Called Home is a chronicle of public milestones and private sorrows. Grande’s overall experience of immigration is an overwhelmingly positive one, where sheer force of will and hard work have enabled her to achieve the watershed moments of high-school graduation, college graduation, a job as a schoolteacher, the purchase of a house, motherhood, and marriage. But there is pain.

A closer look reveals the toll the immigrant experience takes. Long separations, uncertainty, feelings of extreme insecurity and of being considered a permanent outsider result in deep-seated anxiety, shame, and a clouded sense of identity. Hard work and achievable goals help Grande overcome them, but she reveals the life-long scars that the family fragmentations created. None of her family members are unscathed. The traumas are often not addressed directly but manifest themselves, as in the case of her mother, as quests for relationships and situations that will provide financial stability even if it means abandoning people and places along the way.

The fears of those who immigrated to escape the jaws of violence and poverty are never shaken off but instead are transmitted to the children. As a result, Grande battles the twin psychological demons of fears of abandonment and poverty, all the while recognizing that their antidote, the American Dream, may not actually even be her own dream.

Grande’s American Dream may not be an authentic dream but instead a series of overcompensatory behaviors that lead to material success while generating a deep cognitive dissonance about her identity. Is she Mexican? Is she American? If she is Mexican American, what does that mean, and what are the cultural markers that give her a sense of self? Grande often describes herself and her true identity through her craving for certain traditional Mexican dishes, which comfort her not only in their taste but in their assurance of her essence, her core being.

Grande also heals the rupture in her identity by joining a folkloric dance group and learning complicated Mexican dances. Enacting Mexican traditions helps her overcome an alienating sense of “otherness.” She describes the complicated “skirt work,” making the reader wish she had gone into more detail about the dances, costumes, and fusion of influences.

Grande’s experience is valuable because it is shared by many undocumented and documented immigrants, not only from Mexico but from other countries as well, especially those in Central America. Understanding the nature of their traumatic experiences helps us develop compassion as it generates a great deal of admiration for those committed to building a better world for all.