The End of the Moment We Had by Toshiki Okada 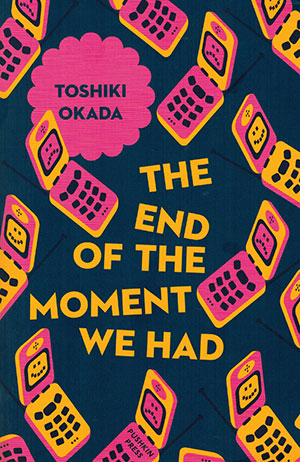 Playwright and novelist Toshiki Okada (b. 1973) offers two uncomfortable vignettes of young people adrift in a world apparently without safe harbor in The End of the Moment We Had. The characters flail about, grasping at chimera posing as stable manifestations of a relationship yet never find succor, save in awkwardly constructed moments of memory.

The disjuncture among purpose, existence, and belonging in their lives finds voice in the structure of the stories marked by a sense of inescapable fragmentation. In the first, the point of view shifts jarringly from person to person, each striving to present a coherent picture yet failing to do so convincingly. In the second, a despondent wife projects onto her imagination of her husband’s activities a series of narratives that seek to construct order and give meaning to her otherwise unremarkable existence. That the twist at the end feels contrived and unsuccessful serves only to emphasize the poignancy of the wife’s lack of place. The aggregate effect of these missteps drives home forcefully that the future is bleak, relieved only by transitory moments masquerading as happiness.

The language Okada employs pulls the reader into the characters’ uneasy world. The idiom in which the characters speak presents a challenge for translator Sam Malissa, who does an admirable job of capturing the annoying quality of those speech patterns and rendering them into a comparably tedious English—no mean feat. Particularly in the first story, this grating cadence effectively projects the characters’ sense of desperation (or resignation?) onto the reader, giving ample evidence of Okada’s skill at making us feel something of what his characters must experience. Our frustration mirrors their dissociation.

His skill notwithstanding, Malissa made some unusual choices as translator. Using the title of the book as the title of the first story where the original was “Five Days in March,” perhaps because he eliminated the first sentence that explicitly sets the time for the story in March 2003, may have been done to avoid confusion with an eponymous play by Okada and upon which this short story is based; however, conflating the two titles occasions an unfortunate narrowing of the scope. Instead of recognizing that both short stories offer a window into loss and unrequited desire for connection, it pushes the reader to privilege one over the other and does, thereby, a disservice to the work as a broader comment on society.