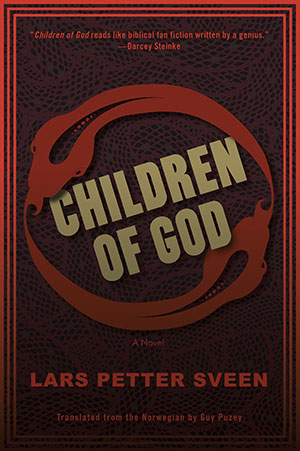 It would do a disservice to Children of God to say it merely focuses on something as clichéd and simplistic as light versus dark, yet at the same time, that very theme is at the core of the biblical stories from which Children of God takes its inspiration. This novel is both an homage to that conflict as well as critical of its lack of nuance. In fact, Lars Petter Sveen’s goal seems to be the presentation of just such a more nuanced take. Doubt and belief take center stage in his work, supported by confusion, depression, hope, and struggle itself.

Set in New Testament times, Children of God tells a series of out-of-sequence and interconnecting vignettes. Cycling through and narrated by the same set of characters throughout their long and crisscrossing lives—including children of Jerusalem, Roman soldiers, wandering thieves, those lost or broken, and even the apostles Simon Peter and Andrew—each chapter gives the reader a new sense of the connectivity and causality of this world.

The not-strictly-linear presentation makes for an intriguing beginning and an occasionally confusing or impatient middle, but once the final third of the novel takes off, it becomes the most comfortable of sprints to the finish line. Completion of the novel rewards the reader with comprehension and appreciation, providing enough answers as to be satisfying while still leaving enough to the imagination to provoke continued thought and repeated returning to the ideas.

Those already familiar with the biblical basis will recognize the allusions to familiar narratives, names, and events, but Sveen never lapses into Bible Bingo, instead ensuring that each drop is deliberate and useful but never entirely essential. Anyone who lacks biblical specifics can still find this an engaging read, although they might walk away with a less traditional, albeit still interesting, view of Jesus and his disciples.

Children of God is Sveen’s first book translated into English, and it marks a stellar debut. The prose in translation reads without issue. It is precise and visual, easy to get lost in and discover dozens of pages have flown by. Unnerving at times and comforting at others, the writing never loses its emotional core. For those interested in novels touching on religious themes with respect but not chained down by reverence, Children of God is the place to look.