The Divorce by César Aira 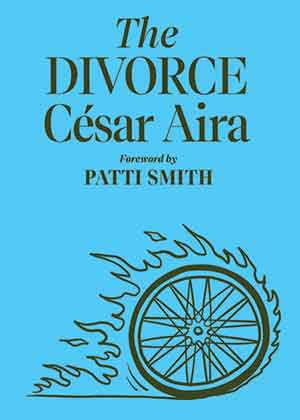 ARGENTINE LITERARY GIANT César Aira chronicles a series of absurd and magical coincidences in this slim novel, whose disjointed narrative slips between reality and reverie, from past to present, and whose lyrical, intentional prose bends the narrative through dreamlike sequences that reverberate through the story like an irregular heartbeat. The Divorce opens with the narrator fleeing the emotional uncertainty of his first postdivorce Christmas with his daughter and ex-wife. He sits at a café in Buenos Aires with Leticia, a young video artist, when the café owner opens an awning that, when unfurled, dumps a deluge of rainwater onto an unsuspecting man walking down the street with a bicycle. Here the story begins, as Leticia recognizes the drenched man as Enrique, whom she had last seen at the fiery conclusion of their childhoods. The narrator then recognizes Enrique as the owner of the evolution-themed guest house at which he is staying. Last, Enrique’s mother lovingly, chidingly recognizes her son from across the café.

Each of these fleeting recognitions takes a handful of seconds and only a few pages; the bulk of the narrative occurs between these chance meetings, when Aira digresses into a chain of fantastical vignettes that exist in a whimsical, uncanny purgatory between the unreal and the real. Boarding-school children shrink to near-atomic size to escape a conflagration and dive into a scale model of the burning boarding school; a boy entertains the childlike avatar of Krishna before his parents abandon him to an apprenticeship with an abusive quasisculptor who lives in squalor; a woman leads numerous, disparate lives marked by violence, Christmas trees, and a mysterious manual; and a man has a love affair with a beautiful and unattainable woman who is as ephemeral as a noontime shadow.

These short, interrupting stories furnish the characters with histories that reflect the Argentine culture and climate of 2008. In this way, The Divorce is a cautionary palimpsest of Aira’s Argentine contemporaneity—it is an overwriting of reality with fiction, with memory, and with fantasy. Aira laments Argentina’s then-complacency with its newfound prosperity, and The Divorce figures and refigures the consequences of Time and the pursuit of eternity. The narrator muses that “because of the sense of impermanence that followed the divorce, I had gone in search of some kind of eternity.” It is this duality—the impermanent and the eternal—that is imbued into the lives of the characters and onto the pages of the novel.

Ultimately, The Divorce is a masterful demonstration of focused imagination. Aira chronicles overlapping coincidences, layering memory with temporality and injecting magic into the mundane to create a kaleidoscopic tale of serendipitous meetings that rumbles like an avalanche down a mountain, gathering speed and power as the novel progresses. With lightness and verve, Aira twirls the macro with the micro to create a singular novel whose story turns and turns again until it comes full circle, like “that ‘little steel fairy,’ the bicycle, from whose spinning stories are born.”