Born Translated: The Contemporary Novel in an Age of World Literature by Rebecca L. Walkowitz 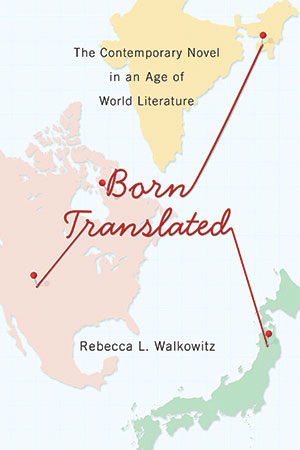 Constantly aware of her semantically loaded and ambitious title, Rebecca L. Walkowitz rightly focuses her epilogue on the mutability of “translated,” having taken her readers on a decisive journey through a state-of-the-art critical and theoretical minefield. Her five chapters, each truly novel in terms of revising extant scholarship, weave a double helix: (1) world literature and its theory, presently understood, as a limit to heterogeneity; and (2) the avatars of belonging, circulation, and location of culture, readership, and reading.

Nevertheless, corrective measures are knotty because they work in isolation and get trickier when they bump up against one another, particularly when novels in many languages translated into English are in play. Thus, limiting The Savage Detectives, Bolaño’s entry into “world literature,” to the semiotics of an illustrated poem flouts numerous cultural issues, among them the lack of difference in the literary Spanish of authors like Vila-Matas or Latin American novelists widely read in Spain. Along with Walkowitz’s admirable job on Pamuk’s untranslated novels and on the geography of Ishiguro’s novels and their versions/book covers in other languages, it would have been equally productive to problematize Ishiguro’s reception if he had published “English novels” in the Japanese he doesn’t write.

In linguistic terms and concerning her great emphasis on expressivity, physical production, and how reception contributes to imagining communities, Walkowitz is convincing regarding Junot Díaz’s punning, as a corrective to Adam Thirlwell’s vague and unconvincing “multiple” translation enterprises. Two unexplored aspects that complement Walkowitz’s timely study are how English-language novels written by US Latinos fare when they are translated into a Spanish that is habitually awkward to a native audience and what actual fluency critics need in foreign languages to discern cultural differences more precisely, the “untranslatability” other critics espouse.

Some of Walkowitz’s proposals could function irregularly, including “comparison” (and its corollary, “comparison novels”) instead of comparative literature, or why some authors leave words untranslated (in Coetzee, whose works merit her best readings). Some suggestions—like “what literature is now has to alter what world literature is now” and what “unimaginable largeness” allows us to consider—have slight applicability. Cultural mobility and imminent digitally translated novels (which will not parse the creativity, inflections, local dialects, or cultural nuances learned by studying foreign languages) will be too complex to extrapolate how Walkowitz’s corpus elucidates the “born translated” notion; but this is an excellent proposition for literary history. (Editorial note: For more, read Rebecca L. Walkowitz’s essay “The Persistence of Books.”)