The Perception of Meaning by Hisham Bustani 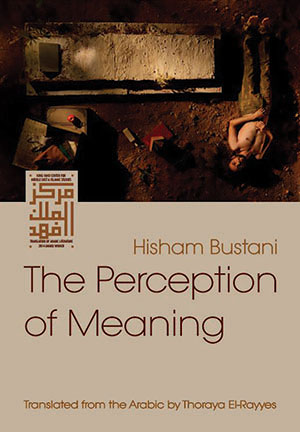 Jordanian author Hisham Bustani has a new book adeptly translated from Arabic into English—a set of fascinating experimental works that Naomi Shihab Nye says “are not lullabies.” Indeed not, since lullabies are for rocking infants to sleep, while these sardonic fictions are about waking up adults.

“Apes do not wage wars,” begins a section of his first fiction (“Apocalypse Now”), which proceeds with perfect logic. “Apes do not invent instruments of torture. / Apes do not puncture the ozone with fossil fuels. / ‘Humans are descended from apes.’ / Who says the apes would approve?” The piece is completed by a paragraph with a “moral” message. “When Man climbed the tree to meet his ancestors, all the leaves fell and species vanished. No color but washed-out grey, and no sound but the breaking of branches in his clumsy hands. Before a full white moon, he sat on one of the branches and began to cry.” The work sets the overall theme, which is the opposite “perception of meaning” that those in denial hold dear. And what is this perception?

“The Book of Meaning” provides a hint: “The actor is on a stage. The stage is a vast wasteland without a trace of shadow. / He throws his voice to the back of the chamber, it bounces back and knocks him down: / the end of the chamber is right in front of his nose. / Whenever he runs and throws sound, walls close in on him at once.” And what happens? He decides it’s pointless, stepping down. But he cannot find stairs or curtain or the wings. “He wandered aimlessly, weeping. / He’d forgotten that the stage is a vast wasteland, unending; without a trace of shadow.” Bustani views daily violence and brings reality into sharper focus, as when he writes of British Petroleum: “BP searches the ocean floor for sacred oil. / When the suction tube is punctured and water drowns in a sea of petrol, / the executive—sitting in his Armani suit, rocking in his leather chair—decides, / to throw a match on the spill. / It’s what the executive calls: an open-air barbeque.” He follows with “Requiem for the Aral Sea,” (a dead sea in Central Asia), beginning “When Man placed his hands in the Aral Sea, / it transformed instantly into a desert, / became a graveyard for rusted ships, a playground to the sands. // Who doesn’t believe in miracles?”

In the final fiction (“Salvation”), there are no answers. “‘Why?’ he asked with bitterness. / And when the answer didn’t come, he broke the mirror with a clenched fist and walked along the path covered in glass shards, looking for another that holds the answer.” Or, “When he sat down to calculate the distance between hypothesis and reality he did not get up ever again.”

Hisham Bustani’s fourth book of fiction won the Translation of Arabic Literature Award from the University of Arkansas. For The Common at Amherst College, he writes: “Engagement with the coincidence of existence at this particular collision point in Arabic life, a point burdened with all the unaccomplished hopes and dreams of previous generations, with rapid transformations, with the need to question a stagnant past/present to contemplate a transition for the present/future, this is what I call new Arabic writing.” The Perception of Meaning fulfills that calling.