A Contrived World by Jung Young-Moon 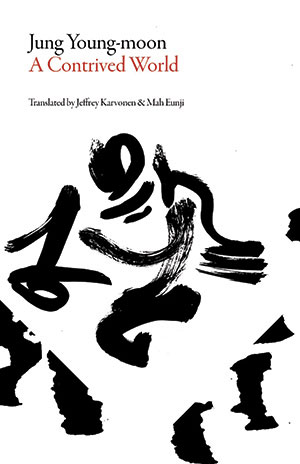 A writer once told me that each work of fiction teaches you how to read its world. The novel A Contrived World is at once a world and no world. Based on the writer Jung Young-Moon’s real-life visit to California, it follows the narrator through actual experiences. A plot summary of A Contrived World, however, reveals nothing about the novel. The word “contrived” immediately telescopes to readers that they are entering an invented world designed by the author, which comments on creating a reality out of words: the illusion of fiction itself.

The narrative follows a sensibility more than a plot line; a simple plot gives way to thought, wonder, and wordplay. In one such early scene, the protagonist is with his girlfriend after sex, talking “about nothing in particular” and “rolling a few pebbles down a slope.” This leads him to wryly consider the origins of his peculiar habit of rolling pebbles and childhood memories of rolling such pebbles down hills. Plot then proceeds to give way to humor and language, which is more entertaining than it sounds.

To live in another’s language means to inhabit another’s mind, and Jung Young-Moon’s mind is a most interesting one. One does not read the novel, in a sense, but rather a personality. A warmth and intelligence infuses the writing as the narrator puzzles over the quotidian mystery of the world around him, entertains himself out of his boredom, and strives to build a contrived world through words, to finally build fiction. One of the pleasures of reading A Contrived World is the wit the author brings to each encounter, from a long, quirky exchange with a hobo in San Francisco, which leads him to reflect on the differences between a hobo and a homeless person, to imagining the way a masticating Jung Young-Moon must appear to a baby.

A Contrived World is generous, holding everything from a minibiography of Richard Brautigan to an articulate defense of avant-garde fiction. Sometimes it comments on its own building; after Moon erases the name Valerie that a young white stranger had written in the beach sand, he thinks to himself that “it felt like a scene that must be deleted from a strange novel.” Another time he tells himself that “I am digressing again, but this is because I am fine with this novel heading in any direction, and because this novel has no message to convey.”

Still, it isn’t quite true to say that Jung is uninterested in plot. Through his eyes, the daily life of Seoul and, mainly, San Francisco, become strange, unfurling in linguistic drama. He relays watching a dwarf in Seoul doing tai chi as well as the struggle with the dwarf that never actually was a struggle, an incipient conflict that became dampened by the sudden, sobering thought that the dwarf must never have been told, “You’ve grown so much since the last time I saw you.” Jung watches a lesbian couple fighting in Hollywood; he amuses himself by imagining different motivations for the fight, the possible outcomes.

Maybe it is more accurate to say that Jung is most interested in plot variations, or the potential rhythms of plot. His meditation on revenge leads to thoughts of revenge on mayonnaise, a condiment that he despises, to “seeking revenge on fiction by writing fiction,” which leads him to realize that he writes fiction “to seek revenge on nothingness, meaninglessness, and the baselessness of existence.” The scene’s humor and imaginative play with language are finally overwhelmed by sincerity. Throughout A Contrived World, the echo of Samuel Beckett’s haunting refrain “You must go on, I can’t go on, I’ll go on” repeatedly breaks through.