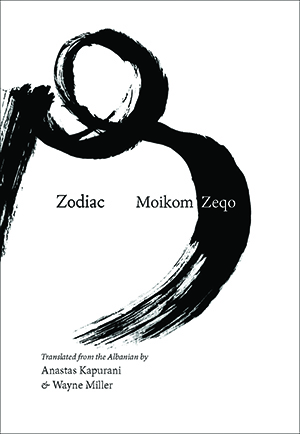 It’s not uncommon for poets to fill collections with the momento mori of nostalgia, regret, and meditations on the end. Albanian poet Moikom Zeqo is not your common poet, thus the recent translation of his Zodiac is not your common take on the end. This bilingual edition of poems written in the late 1990s tackles the end of the millennium, the decline of communism in eastern Europe, and the crumbling of Western civilization as a whole. But if it’s about endings, it’s also about beginnings, restarts, and liminality as Zeqo’s poems spin the reader through the past, present, and future on a joyride of associative logic, or as the second poem of the collection puts it, “Çdo mbritje ёshtё rikthim. Çdo funs ёshte dhё fillim” (Each arrival is a return. The bottom is also a beginning). Restarting seems a natural focus for this poet, who has been a rural schoolteacher (during a period of exile in the 1970s), Albania’s minister of culture, a member of the Albanian parliament, and an undersea archaeologist, to name only a few of the many lives he has led.

The images of the collection both celebrate and interrogate the history and culture of a country that has been under the control of both the Roman and Ottoman empires as well as Mussolini and later a repressive communist dictatorship. The poems based on the twelve signs of the zodiac as well as a few prediction poems have the reader imagining what it would be like to put butterfly wings on biblical lions, make clay pots from Caesar’s bones, and gaze upon the red and flaky skin of Prometheus’s eczema. With Zodiac, Anastas Kapurani and Wayne Miller have shown themselves to be sensitive and skilled translators of Zeqo’s work, allowing the poems to revel in a mixture of control and abandon.

As the introduction by Miller points out, Zodiac has similarities to Whitman’s Leaves of Grass, wrapping the reader in the dithyrambic litany of a knowledgeable man. Zeqo, however, is more cynical (or perhaps more realistic) than Whitman ever was and carries with him the scholar’s sense of discontent coupled with a postmodern notion that readers should do a little work for their meaning. Those willing to bring patience and play to their engagement with the text will be duly rewarded with lines such as “Tё perditshme e kam alegorinё si kёmishё, / te flokёt e kozmosit sa shumё morra hyjnish!” (Each day, I wear allegory like a shirt, / and in the hair of the cosmos—so many divine lice!). This is a text that deserves (and demands) focused attention. It is a text all Ashbery-loving twentysomethings who think they’re doing something new must read and learn from.