The Road to Ballyvaughan by Gibbons Ruark 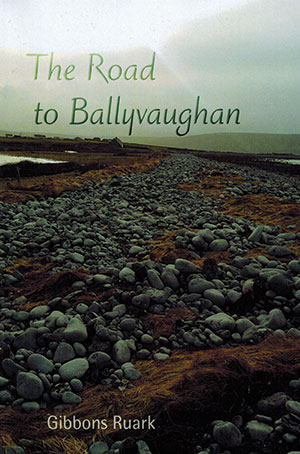 This masterful collection begins with a foreword in which Gibbons Ruark describes how his association with Ben Kiely awakened his interest in his own Irish heritage and the writing of these poems, dedicated to Kiely and Seamus Heaney. This establishes for the reader an understanding that these are not poems of tourism but of the discovery of ancient and contemporary kinship.

The road to Ballyvaughan is not an easy one, for one must pass by a statue of “the Virgin / Who looks blindly out for the nine young ones dredged up / Body by body, scarcely recognizable . . . [Who] stands there blind as water in their remembrance.” One must also pass “the tomb of Conor O’Brien.” Yes, there will be reminders of our tenuous existence but also friendship, wildflowers, pubs, music (particularly singing), the sea, cliffs, Irish politics, and the intimacy of lovers. The Road to Ballyvaughan, then, is the arc of a life; its section titles begin, ironically, with “Departures” and then lead to sections entitled “Clare,” “Galway,” “Mountain Rain to River Shine,” “Monaghan,” “Dublin,” and “Arrivals,” the final section comprised of only one poem, “Lightness in Age.” We see a generally eastward movement, suggestive of a journey to origins and arrival in old age and its “lightnesses,” such as the “new lightness” of “a long-known kiss” now “back-lit by the glow / Of that consuming first one fifty years ago.”

These are poems that look quietly and speak quietly, calm enough with time enough not just to recall but to feel the past, the past that informs our present, the full length of the river coming to the mouth of its present and, in this case, the mouth of the poet who sings quietly for those who would hear. In these poems we hear also the ancient kinship of poetry and music, particularly song. Ruark writes primarily in iambic meter with pentameter lines, frequently in the form of sonnets or blank verse. He does not confuse “free verse” with the reckless abandonment of the qualities of the English language itself, its accentual-syllabic rhythms, its tonal registers and sonic textures. Instead, he brings the full inheritance of English-language poetry into its current, living, contemporary voice.

These poems are gardens, not forests, but they are naturalistic gardens that find the exact place on the ledge of speech where ordinary expression lifts off into song. Take, for example, these completely unassuming lines: “I sit with Mick McGinn and watch the swallows / Dipping till they nearly touch the roadway.” The subtle weave of assonance and consonance (e.g., the occurrence of the short “i” sound five times in the first six syllables), does not demonstrate itself but quietly persuades the reader with its music, “a text as fine as a feather.” Line after line, we are delighted by the perfect aptness and beauty of expression in these poems—quiet, calm poems whose steady, nuanced music leaves the reader restored to himself and tapered into thought.