Points of Origin by Diao Dou 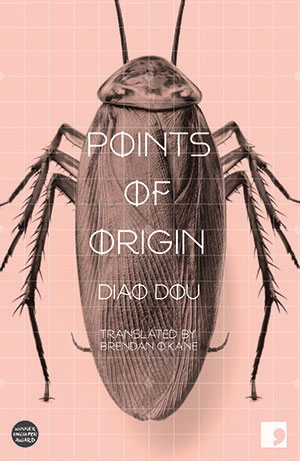 A collection of nine short stories, Points of Origin is the first volume of Shenyang writer Diao Dou’s work to appear in English. Born in 1960, he belongs to the same generation as Mo Yan, Yu Hua, and Su Tong, and he shares with these writers the ability to shift between the political tragedies of the recent past to the ostentation and materialism of the present. He is, however, more cutting and expository of the hypocrisies of Chinese society, a tack that is enabled (and perhaps defused) by his extensive use of the international arsenal of postmodernism. Formally inventive, absurd, surrealist, cruel, Diao Dou is at his best when skewering bureaucracy or allowing his characters’ everyday lives to veer into intertextual nightmares.

One story, “Squatting,” is reprinted here from Comma Press’s 2012 collection Shi Cheng: Short Stories from Urban China. A satire on the death of high-minded citizenship and complicity in authoritarian control, the story charts the effects of various municipal ordinances designed to curb nighttime criminality, leading eventually to a regulation that all people must squat, and walk squatting, when outside after curfew. The pitch-perfect mimicking of bureaucratese, the eerily reasonable logic of the measures, and the profile of a clutch of concerned citizens transformed into a cabal of the privileged make this story the best of the collection.

Several of the stories would not be too far out of place in the literature of twentieth-century central and eastern Europe, and Diao Dou cites his influences openly. Kafka in particular comes on a little strong—the collection involves two metamorphoses, in one of which cockroaches overwhelm a city. Although this might seem derivative, the tourist hordes who come to snap pictures with the cockroach hordes and the institution of regular but disingenuous cockroach-combatting conferences imbue the story with a bitterly amusing local context and topicality. It takes a satirist to point out that what ought to be unthinkable is implausible by only a hairbreadth.

Brendan O’Kane, in his first book-length contribution as a translator, shows himself an assured and stylish craftsman. Diao Dou himself, however, could do with a harsher editor: all the stories might have been trimmer and sharper, and sometimes the formal conceit is not especially novel nor quite enough to carry the story. Moreover, the thinness of the female characters does little to dispel stereotypes of a chauvinistic northeastern China. This volume is, however, greatly to be welcomed for broadening the geography and tone of contemporary Chinese literature available in English.