Something Will Happen, You’ll See by Christos Ikonomou 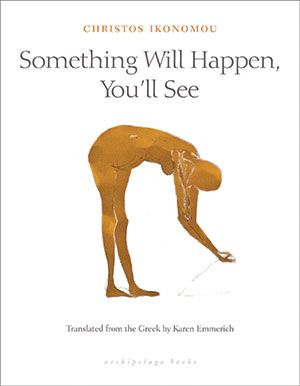 Christos Ikonomou’s award-winning second collection, Something Will Happen, You’ll See, is a thoughtful glimpse into the flawed and sometimes-comic existence of the working-class men and women living at the periphery of Greece’s capital.

In the opening tale, “Come On Ellie, Feed the Pig,” a woman molds halva into the likeness of an estranged lover and proceeds to eat him. In “Placard and Broomstick,” a grocery clerk mourns the death of his childhood friend, carrying a blank sign through the streets in protest because he’s “filled with an incredible emptiness.” An unemployed dockworker in “For Poor People” watches a strange woman paint an expression of a choking face onto a bollard, where a rope is tied from a boat like a noose. In the closing story, “Piece By Piece They’re Taking My World Away,” a couple spends their final days in an old house as the unique stones of its foundation are looted by neighbors and the government moves to expropriate the property.

This collection is a kind of Dubliners for the postcrisis generation and a lament for the marginalized inhabitants of neighborhoods around the shipping district of Piraeus. Ikonomou succeeds at immersing the reader, through a panoramic stream-of-consciousness method of narration, into fifteen lives where “pain and fear come later, when the wound cools.” Characters are increasingly preoccupied with memories or daydreams even as hardship envelops them. An undefinable dread lingers and builds steadily over the course of the book, leaving you feeling that the worst hasn’t even started yet, despite occasional glimpses of hope or closure.

Where there’s fault to be found with the book, it’s most noticeable in occasionally rigid efforts at Faulknerian tangents where the sentences struggle to find their footing at the expense of flow, though it’s unclear if that’s on Ikonomou or the limits of the translation. Still, the collection mostly shines, particularly in its clever symbolism and living characters. Ikonomou is an author of substance as much as style, and Something Will Happen, You’ll See is a stunning, if somewhat bleak, sketch of a country in flux.