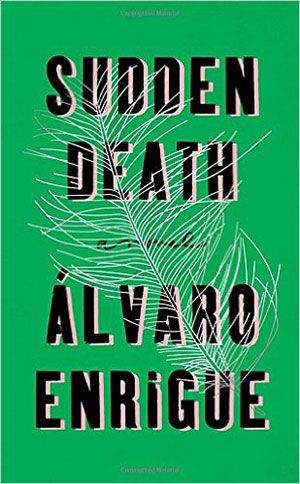 The present, in part, is the continuous rewriting of past and future—the modification of historical narratives to suit a particular message or goal. In his novel Sudden Death, Mexican-born, New York–based writer Álvaro Enrigue uses a substantial dose of creative license in rewriting certain historical events—from major to minor—to critique both globalization and the homogeneity of literary fiction. The Spanish invasion of the New World, the tumultuous life of Caravaggio, the death of Anne Boleyn, and the erotic escapades of notorious conquistador Hernán Cortés are revised and woven into an intricate, inextricable tapestry. With apparent effortlessness, Enrigue fuses together ostensibly discordant narratives, fashioning a riveting, hilarious, and insightful romp.

Set during the Counter Reformation and framed by a duel-like game of pallacorda—akin to tennis—between Italian maestro Caravaggio and Spanish poet Francisco de Quevedo, the novel comprises vignettes traversing decades and continents, with Enrigue inserting inventive restagings of personal interactions in a broader historical context. From Caravaggio’s escapades in Rome to the pillaging of Tenochtitlan, we travel around the world and into the private lives of popes, poets, and prostitutes. As the novel unfolds, recurring objects—a tennis ball stuffed with the hair of Boleyn, severed before her head befell the same fate; the scapular of Cortés; and a mantle of iridescent feathers crafted by Aztecs—neatly (albeit implausibly) link these otherwise isolated plots.

It is a disservice to discuss Sudden Death without emphasizing the impeccable work of translator Natasha Wimmer. With dexterity, Wimmer navigates the novel’s blend of Spanish, Nahuatl, and Italian, the result reading seamlessly, demonstrative of how translation can itself be an art form. By preserving certain Italian words, Wimmer enhances our sense of locale and places us in the action, the umpire’s shouts of Trenta-amore echoing in our imaginations.

Perhaps the simplest description of Sudden Death is contained within the novel itself: “A book with a lot of back and forth, like a game of tennis.” This is, however, entirely insufficient, as the novel resists categorization, darting among genres with remarkable deftness, neither wholly history, criticism, autobiography, nor pure fiction. Enrigue writes skilfully about art, globalization, and religion but truly excels at creating authentic, vivid depictions of emotional and physical intimacy. With these, the novel feels personal and provocative, rather than flat and factual, and thrums with a menagerie of life.