The Gun by Fuminori Nakamura 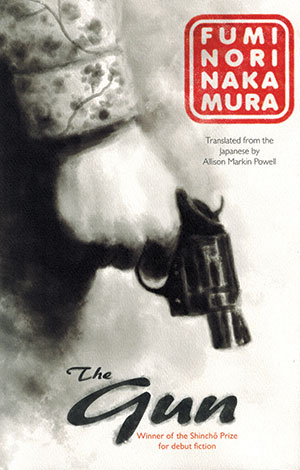 In Fuminori Nakamura’s The Gun, this master of Hitchcockian noir builds on the style and plotting that made his recent The Thief and Evil and the Mask masterpieces of modern crime fiction.

The novel kicks off with its hook: Nishikawa, a young student out of Tokyo, stumbles across a dead body while out on one of his nightly walks. He discovers a gun on the body and, in a moment of impulsivity, takes it with him. Thus begins his strange obsession with his newfound toy: the gun begins to call out to him, to speak to him. He cancels appointments with friends to simply sit at home, looking at the gun. It’s in this obsession that Nakamura’s strengths really shine. He is able to deposit the reader into the head of this disturbed, sociopathic young man. While we don’t necessarily sympathize with Nishikawa, we are at least made to understand, from a somewhat cold distance, his thought process, his feelings.

Nakamura successfully weaves in a commentary on modern Japanese culture with respect to its relationship to outsiders, specifically Americans. This is done in a nonintrusive way that blends seamlessly with the propulsive narrative.

Toward the end of the book, Nakamura hits a bit of a snag. He begins to pile up threads that will lead to the book’s harrowing conclusion. Unfortunately, these threads come so late in the book that they are not properly built. Such is rarely the case for this reader, but the book feels like it could be about a hundred pages longer. We have so much fun in the first two-thirds, living in the wormy brain of this strange man, that we feel a bit wrenched from it when the plot kicks in.

Overall, however, this is yet another masterwork from one of the best modern practitioners of the crime novel.