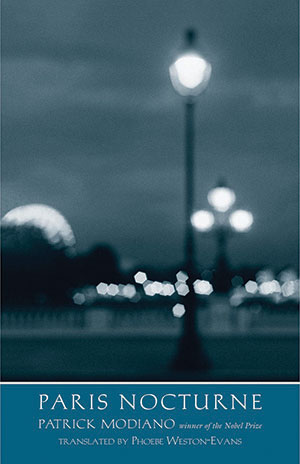 Thirty years after it happened, the protagonist of this haunting novel recounts how, one winter night, when he was not quite twenty-one, he was hit by a car in Paris.

The driver, a young woman named Jacqueline Beausergent, looks like someone he knew when he was involved in a similar accident years earlier. Accompanied by a vaguely threatening and shady man who knows her, they are both taken to the hospital. When the protagonist wakes up, the woman has disappeared. The man makes him sign a report of the accident, gives him an envelope full of money, and disappears too, just like the protagonist’s father did and just like his mother, who was not there when he was run over as a child. The protagonist feels compelled to track down Jacqueline and her associate. A strong sense of déjà vu leads him to revisit a past he wanted to leave behind.

Substantially autobiographical, like so much of the author’s fiction, the text contains many elements familiar to Modiano’s readers. There is, for instance, the wandering through Paris and the feeling that “a man without a landscape [is] thoroughly diminished.” Translator Phoebe Weston-Evans chooses to stress, in the title, the importance of the city. The French version—Accident nocturne—stresses chance, the kind of chance that takes on the look of fate. There is also the play of anamnesis and amnesia, the quest for past and self, the search for the father, and Oedipal configuration. Finally, there is Modiano’s limpid and elliptical style, blending vagueness and precision, realism and dreaminess, and there are numerous questions that find no answer. But perhaps there is no need for answers, and perhaps one should not look “for mystery where there is none.”