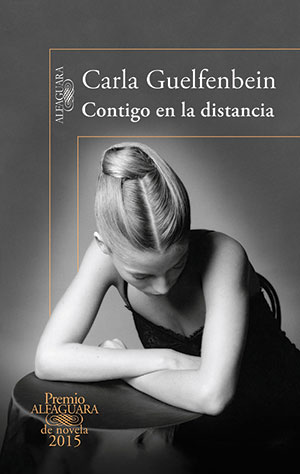 Chilean writer Carla Guelfenbein’s Contigo en la distancia is the 2015 winner of the prestigious Alfaguara Novel Prize. The novel takes its title from a popular bolero written in 1946 by Cuban singer-songwriter César Portillo de la Luz, a song that has been interpreted over the years by many international artists. Like Guelfenbein’s previous four novels, this work revolves around the intimate lives of a limited number of characters and reflects the author’s own life and experiences.

The novel opens after the death of Vera Sigall, an accomplished novelist who had been in a coma after falling or being pushed down the staircase in her home. Although she is the main character, the story is narrated by three other characters: Emilia, a young Chilean literature student who was raised in France and has come to Chile to meet and study the works of Vera Sigall; Daniel, a young architect who dreams of someday building and operating his own restaurant; and Horacio Infante, a celebrated poet who in the past had maintained a long-term affair with Sigall, a married woman. Through their voices, the reader pieces together the relationships between them and comes to know more and more about the enigmatic, silent protagonist.

The author has commented in interviews that the character of Vera Sigall is based on the life and literary career of Clarice Lispector, the Brazilian writer of Jewish ancestry whose family faced genocidal persecution in the Ukraine before immigrating to South America. Guelfenbein, who was born into a family of Russian-Jewish immigrants in Santiago, Chile, has spoken of the similarities between Lispector’s family history and her own. Although the past is not the principal preoccupation of the novel, this history of past repression lurks in the background, as does the 1973 military coup in Chile.

Despite this historical and autobiographical grounding, this is primarily a novel of suspense and of the development of characters. It is also a novel about literature and literary influences. Given that two of the main characters, Vera and Horacio, are renowned writers, and that Emily is a student of literature, the novel abounds in references to writers and major works of literature.

In sum, this is an engaging, enjoyable novel: Guelfenbein has created characters that are authentically human and interesting, and her direct prose and skillful handling of suspense maintain reader interest to the novel’s very end.