The Man Who Snapped His Fingers by Fariba Hachtroudi 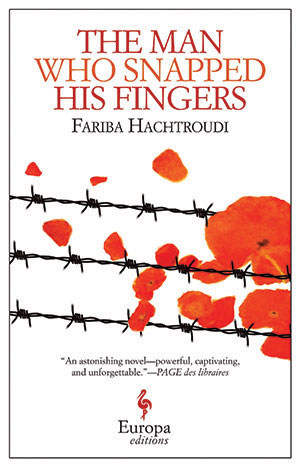 The Man Who Snapped His Fingers tells the story of a colonel from the inner circle of the Iranian supreme commander who now lives in another country and an interpreter at its Office for Refugees and Stateless Persons who interprets for him. This is how the two meet at the beginning of the book. They, however, have a history: he recognizes her immediately as prisoner 455. She recognizes him too, though the only thing she remembers is the manner of his walk—“Haunted by the memory of a twisted walk. Of a pair of giant’s feet”—and that her tortures came to an end and escape became possible when he appeared in her life.

In the following chapters, we learn more not only about their separate and shared pasts but also about their present turmoil. The enemies of the past reach out to one another to try to understand and save their loves: the colonel, the love for his wife; the interpreter, the love for her husband.

To tell the story, Hachtroudi chooses a first-person narrator point of view. She actually gives us two “I”s: one is the colonel speaking, in his head, to his absent wife; the other is the interpreter who contemplates her past and present as she goes through the events.

The premise of using interior monologues of the two characters all throughout (except for the last few chapters) gives us access to both sides of the story, but it falls short at moments, making us wonder whom they really are for. There are instances where what is supposedly addressed to the wife seems to be information that aims to fill in the gaps for a reader who is an outsider to the colonel’s situation and country; the same applies to some of the interpreter’s thoughts. It is not certain whether these choices were part of the original or were results of the translation process.

There are also aspects of characterization and details of the story world that do not feel quite right. I am, for example, not sure if I believe this notorious colonel being allowed to rise through the ranks without having a wife who is completely on board or who at least fakes it to be able to make this world possible; or this intelligent wife not finding out the truth about her husband and his life for so many years.

Despite these points, The Man Who Snapped His Fingers is a touching story about the enigmatic human soul and our interrelated fates that needs to be read and reflected on.